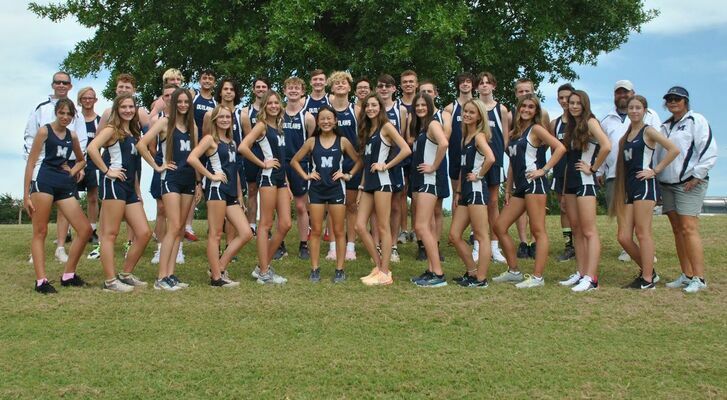 After a stellar performance at the Canadian Valley Conference meet on October 12 and Elgin on October 15, both Marlow High School cross country teams are bound for Regionals in Waurika this Saturday.

The boys’ team earned their third straight Canadian Valley Conference championship while the girls were runners-up behind Pauls Valley. The Lady Outlaws then came in third overall at Elgin in a field of 22 teams.

“The girls are really starting to buy in on what we want them to do and it is really paying off,” said Head Coach Mikey Eaves. “[They] are realizing that they truly have a shot at the podium if they run to their full potential.”

“[Kizarr] is one of the best runners in the state and really has a chance to shine the next two weeks,” Eaves said.

Kyah Blundell ran the two mile in 13:56.32 at Elgin. Eaves said that Blundell has potential to rise to the top in the postseason.

“She is so talented and with a good two weeks of practice has a shot to be in the top group of girls at State,” Eaves said. “She is becoming one of our cornerstones of the team.”

Ariana Gomez also has a spot on the varsity team in her first year ever to run cross country.

“She realized through her success in the previous track season that she could be really good at cross country and we couldn’t be more thankful for her willingness to try,” Eaves said.

Eaves said that he is looking forward to the postseason and feels that the girls have the potential for success.

“Coach Tammy Miller, Coach Matt Ivory and I are so proud of what they are accomplishing and finishing the regular season so well,” Eaves said. “The rest of the team all did really well and I can’t thank them enough for all their hard work this year. Each of them are a huge reason we were so successful this year.”

The Outlaws boys team was challenged by illness after the Canadian Valley Conference meet and struggled at Elgin, coming in 15th overall in a field of 29 teams. Coach Matt Ivory said that he felt the team could recover for the postseason.

“One thing that we never have to worry about with these guys is the effort they give in practice as well as in meets,” Ivory said. “I really believe the pieces are there to make some noise in the postseason if we can put it all together.”

Ean Hewitt was Conference runner-up on Tuesday, coming within a fraction of a second of the individual conference championship. Ivory said he believes Hewitt will have a good postseason.

“He has been so steady all year and his work ethic in practice has put him in a great position for regionals and state,” Ivory said.

“[Brown] is the tone setter for the team, especially at meets,” Ivory said. “He is extremely competitive and does not back down from a challenge. He had a tremendous run at Elgin and has a real shot at the Top 15 at state.”

“All of these guys will tell you that the team environment and work ethic that is displayed by the entire team is what will lead to sustained success not only this year but into the future,” Ivory said.

The Marlow girls team is ranked 4th in Class 3A and the boys team is 5th as of October 13. The regional meet in Waurika begins at 9am on Saturday.