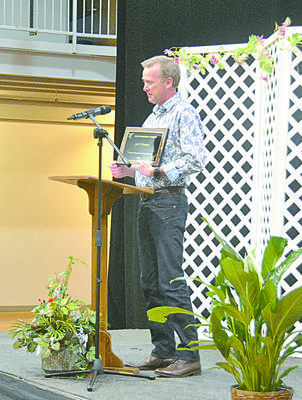 Jeff Prater was named Citizen of the Year at the 2019 Chamber Banquet.

As you may realize this contribution to The Marlow Review is due each week on Tuesday morning. Our heads are all spinning with the rapid changes in the COVID-19 news and all the extraordinary reactions across our country. Gov. Kevin Stitt hosted a teleconference Monday with the Chamber of Commerce executives across the state, and as you might assume, is keeping Oklahoma’s mayors and city and county officials continually updated as well. It would be careless to try to pass on information which will be three or four days out of date by the time you read this, but rest assured, Oklahoma’s Governor is using all available resources to move our state forward through this crisis.
Looking past this unprecedented time – as we must do -- the annual Marlow Chamber of Commerce Banquet is on the schedule Monday, April 27, at 6:30 p.m. at the First Baptist Church LIFE Center. A committee is appointed to select the 2019 Citizen of the Year, the 2019 Community Improvement Award and the 2019 Free Enterprise Award which will be presented at the Banquet. That Committee asks for input from everyone in the community – not just Chamber members. Your suggestions may be sent to 223 W. Main, or to marlowchamber@cableone.net.
And in the middle of it all, March 17 was still St. Patrick’s Day. Did you wear your green this week to recognize the Irish holiday? If so, you weren’t alone. If you are of Irish heritage, here are some facts from the US Census Bureau which might interest you. 34.7 million is the number of U.S. residents who claimed Irish ancestry in the last census. This number was more than seven times the population of Ireland itself (4.58 million). Irish was the nation’s second most frequently reported ancestry, trailing only German.
In our neck of the woods most of us think more in terms of cowboys and outlaws than Ireland and shamrocks.

Some interesting historical facts surfaced in a Tulsa World article a while back. In the 1910 Census 1,800 Oklahomans described themselves as Irish-born, and Irish settlers accounted for nearly 10 percent of all foreign born residents in Oklahoma at the time of statehood.

It’s always interesting to revisit the strong bond between Ireland and our state, found in Oklahoma Historical Society’s Encyclopedia of Oklahoma History & Culture: “The presence of first and second generation Irish and Scots-Irish in present Oklahoma can be traced to the federal policy of relocating American Indians, especially the Five Civilized Tribes. Many of the mixed-blood members of the groups that moved to Indian Territory in the early to mid-nineteenth century had an Irish parent or spouse.”

“In 1847 the Choctaw Nation raised a significant amount of money to provide relief for the Irish famine. This gesture not only connected many with their parents’ forebears, but also showed empathy for people to whom they could relate in suffering. The Choctaws had recently faced hardship on their own ‘trail of tears,’ when the tribe had been forcibly removed to the Indian Territory. In 1995 Ireland’s president, Mary Robinson, visited Durant to thank the Choctaw people for their act of kindness more than a century earlier.”

“After it became ‘the oil capital of the world,’ in 1930 Tulsa overtook Oklahoma City for the greatest number of Ireland-born residents, with 155. In 1930 Oklahoma had 972 ‘green isle’ natives, but 9,801 residents with one or more Irish parents.”

So why are more of us not really aware of the Irish - Okie connection? The same publication goes on to say: “The Irish differ from many of the state’s immigrant groups in that they rapidly blended into the population, with most marrying Americans. Throughout the rest of the twentieth century the number of immigrants and first-generation Irish trended downward. In 1970 the state had 491 residents born in Ireland and 2,093 with one or both parents born there. In 2000 over 10 percent of Oklahomans labeled themselves of Irish ancestry, which closely correlated to the percentage of Americans who claimed the same.”

Again, from the U.S. Census Bureau, thirty-three percent of those category age 25 years old or over have bachelor’s degrees or higher, with 92.5 percent of Irish-Americans in this age group having at least a high school diploma. For the nation as a whole, the corresponding rates were 28.2 percent and 85.6 percent respectively. The annual median income for households headed by an Irish-American is $56,363. For the population as a whole, the income is $50,046.
Signing off with an inspirational blessing from the Emerald Isle: “As you slide down the bannister of life, may the splinters never point in the wrong direction.” Right now all the splinters feel pointed in the wrong direction. Our incredible country, state and community will prevail with the help and prayers of all.