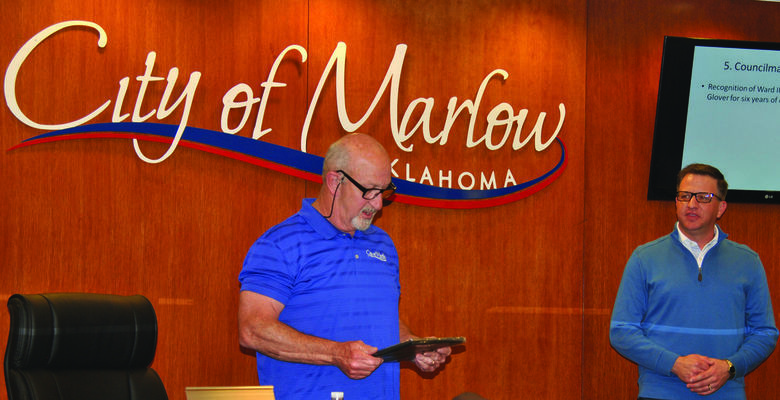 The Marlow City Council honored Ward 2 Councilman Danny Glover on Tuesday for his six years of service, presenting him with a plaque of appreciation and a round of applause. “I have mixed feelings about this, but I’m old and I think a new person needs to step into this seat. It’s been a pleasure and an honor to work for this community,” Glover said.

The Marlow City Council and Municipal Authority had packed agendas on Tuesday that included bids for improvements to be made to the police and fire building, plans to lift the “Shelter in Place” orders, and preliminary budget discussions.

The bid accepted for the renovations on the Municipal building went to WW Builders. Without the alternate requests, the bid was $102,492 and $112,442 with alternates. The Council had approved a budget of $110,000 for the project, so City Administrator Jason McPherson suggested removing one item from the list of alternate requests so that the project would be within the budget’s scope. After discussion, the Council recommended removing the item that called for changes to the exterior lighting and possibly completing that portion of the project at a later date, bringing the project budget total to $106,442.

Addressing the Shelter in Place order that had been imposed in March, the Council discussed following the Governor’s three-phase plan for reopening public spaces and businesses. The Governor’s plan calls for Phase 1 (hair salons, places of worship, restaurants, movie theatres and sporting venues) to begin on May 1, Phase 2 (organized sports activities, bars, funerals and weddings) on May 15, and Phase 3 (to be determined) on June 1.

McPherson said that in response to the Governor’s plan, the City’s actions would include:

• Reopening City Hall to inside traffic on May 18

• Reopening the Garland Smith Public Library on May 18

• Eddie Palmer Park will open to the baseball league beginning May 25 for practice and league play June 1, with the regulation that no food preparation will take place on the premises

The orders and restrictions will continue to evolve with the Governor’s directives.

The Council also discussed the preliminary budgets as presented by McPherson, including a 12% drop in sales tax projections for the City’s General Fund. “We’ve seen towns doing 25% and more,” McPherson said. “But if we start cutting more than 12% people are going to start losing their jobs…We budget conservatively and it’s helped us. We’re in a position where we’ve got some reserves to go on.”

McPherson also said that special projects and capital improvements were previously earmarked and that there would be some scheduled use of budgeted reserves.

“It’s this way every year,” McPherson said. “But we feel more confident in past years.”

During the Municipal Authority meeting McPherson also reviewed the preliminary budget for MMA. “We’re looking at a 14% drop in projections for electric revenue,” he said. “We haven’t seen actual numbers yet but we’re already seeing a drop.”

He added that the budget reflected a $590,000 drop in expenses from last year, due to a few factors.

• Moving an employee to the General Fund budget;

• A reduction in electric purchase amount;

• Moving the transmission line project to the tax revenue capital projects budget; and

• Closing the public pool for the season to do some improvements

McPherson also addressed the tax revenue projects that include the nine-phase project to replace five power poles per year and improvements to Eddie Palmer park, as well as capital improvement budget that includes water break meters that will automatically report water main breaks.