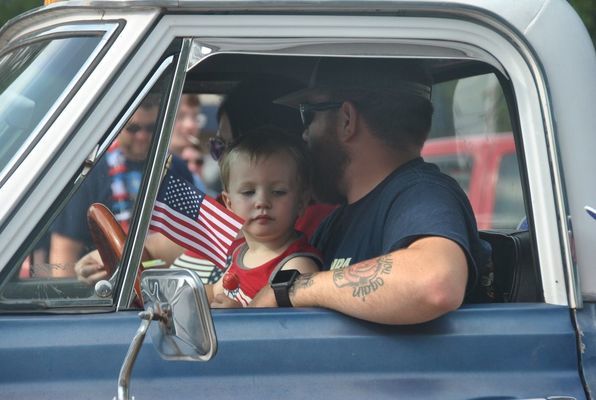 It’s wonderful to have another Marlow-style Fourth of July Celebration on the near horizon! There are some time changes to lock in on your daily planner though. The celebration will start with a 9:00 a.m. Chamber-sponsored parade, and the magical fireworks display beginning at 9:30 p.m. will end the day.

Local businesses, churches, civic clubs and other organizations are always encouraged to be part of each of Marlow’s parades. Enter a float - walk - drive a car! With all of our welcomed guests in town for “THE FOURTH” let these visitors know you’re glad to have them here.

It’s always a surprise when callers ask, “What does it cost to put an entry in the parade?” You will be absolutely right if anyone asks you and you tell them “No...no entry fee. Just come, put your entry in the parade line up, and have fun!”

Most of the parade lineup is around the high school area beginning at 7:45 a.m. However, the horses and horse drawn are asked to unload at the City Hall building at 119 S. 2nd. Horses and horse drawn entries will be escorted to the lineup area right before the parade begins. Call the Chamber office (580-658-2212), and find out your entry’s lineup location.

The parade will feature a variety of competitive categories, including antique autos, tractor categories, floats, decorated bicycles, best motorized off-road vehicle, and horses and horse drawn. Chamber officials require that all entries in the off-road vehicle category be decorated with the 4th of July holiday theme.

Everyone is also looking forward to July 17th and 18th, the official dates of the annual Second Chance Trade Days community wide garage sale. Lots of calls inquiring WHEN they can expect to find bargains in the Marlow area have been coming into the Chamber office. Start cleaning out those closets, garages, basements and attics! You can turn YOUR trash into treasure!
As we look forward to the Father’s Day weekend, here are some Father’s Day facts posted on census.gov: “The idea of Father’s Day was conceived slightly more than a century ago by Sonora Dodd of Spokane, Wash., while she listened to a Mother’s Day sermon in 1909. Dodd wanted a special day to honor her father, William Smart, a widowed Civil War veteran who was left to raise his six children on a farm. A day in June was chosen for the first Father’s Day celebration, June 17, 1910, proclaimed by Spokane’s mayor because it was the month of Smart’s birth.”

“The First presidential proclamation honoring fathers was issued in 1966 when President Lyndon Johnson designated the third Sunday in June as Father’s Day. Father’s Day has been celebrated annually since 1972 when President Richard Nixon signed the public law that made it permanent.”

Most everyone has felt the need to watch their budgets closely the last few months. You might be surprised by this May 28, 2020 article from the National Retail Federation. “’While fewer expect to take their loved ones out this Father's Day, they’re making it up in other ways. ’A lot of the everyday activities that consumers may have taken for granted like a family cookout or simply being able to give their dads a hug were put on pause with COVID-19,’ Prosper Insights Executive Vice President of Strategy Phil Rist said. ‘As a result, many people want to make this Father's Day stand out.’ That sentiment is playing out in consumers' spending plans: On average, consumers plan to spend $149 on special gifts for dad, approximately $10 more than they spent in 2019.”

Happy Father's Day to all you fathers, uncles, grandfathers, friends and mentors who care about the kids (and-kids-in-your-hearts) who bless your lives. “Small boys become big men through the influence of big men who care about small boys.” – So very true.