Firefighters Fill the Boot in Memory of Former Chief 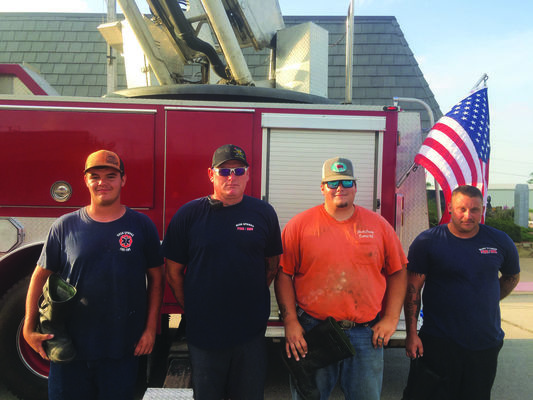 Herb Miller is remembered in Rush Springs as not only a great Fire Chief, but also a great friend. On July 15th, 2020, several firemen stood downtown for a “Fill the boot” fundraiser in his honor.

Buddy Martin, a local fireman, remembers him well. “Herb spent 20, maybe 25 years with the Rush Springs Fire Department, where he retired as chief.” Herb is remembered in the community as owning Rush Springs Lumber and Hardware until his retirement, when he then worked as a handyman along with his brother-in-law, Wendell Woods.

“Just on the west side of the post office, there used to be a dome building, which was his lumber yard. He also set up the Rush Springs EMS, years ago. But I’ve known Herb my whole life, as a family friend,” remembers Martin. Herb served as chief of the Rush Springs Fire Department and was instrumental in founding the first Emergency Medical Service in Rush Springs. He was a strong supporter of the community, school, and Rush Springs Lions Club.

Herb passed away on Saturday, July 11, 2020, and the Rush Springs firemen wanted to do something to help the family. The men spent two days in the heat holding out their boot to cars driving by. Many locals were happy to donate to the cause.
Jeff Adamson, an Assistant Fire Chief, is appreciative of the community response, saying, “I can say it was a huge success and the community was very generous in showing their love for the former Chief.” Anyone wishing to make a donation may do so at the Rush Springs City Hall.

Herb is survived by his wife, Vangie, along with many grandchildren and great grandchildren. According to Martin, the couple tragically lost all of their children, Debra, Carrie, and Laura. In 1978, the couple lost a daughter and four grandchildren in the same night due to carbon monoxide poisoning. Then in 1980, they lost another daughter, and then finally lost their third daughter due to a car wreck a few years ago.
According to his obituary from Callaway Smith Cobb funeral home, Herbert was born Friday, December 20, 1929 in Fort Scott, Kansas. He was drafted into the U.S. Army, and stationed at Fort Sill, where he met his wife of over 60 years, Vangie Harrison. Together, they had three daughters: Debra, Carrie, and Laura.

Though some knew him as "Shorty" the legacy he leaves behind is enormous. His most important job in life was that of being a "Pa" to eight grandchildren, six great-grandchildren, and two rotten granddogs. He built rocking horses for every first Christmas, and always had the answer to "How do I fix this?" Herb enjoyed fishing and watching the Texas Rangers and Oklahoma City Thunder.

Herb was preceded in death by his parents and his siblings as well as his three daughters: Debra, Carrie, and Laura.