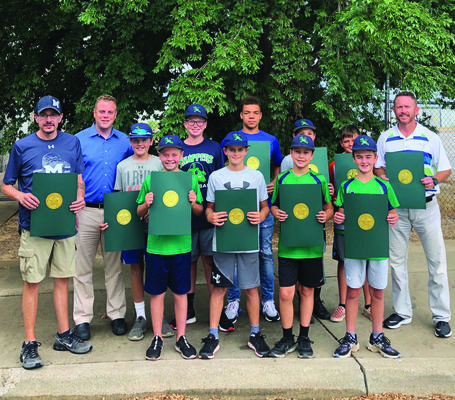 The Marlow Snappers 11U team traveled to Choctaw last month and brought home the AA division State Championship in the USSSA tournament.

The team, headed by coach Ty Ortega, swept the tournament 6-0, averaging 12 runs per game and only giving up 4 in each bout. The Snappers went 28-4 in a season that was unconventional by most standards due to the COVID-19 pandemic shutdown.

Ortega said that the team made it to one tournament before the shutdown interrupted the season, but that they managed to regain momentum after games were allowed to start up again.

“We were really finding our stride before that,” Ortega said. “We missed out on probably five good tournaments that were canceled.”

All the same, Ortega said that they had the opportunity to compete against several skilled AA teams that were formidable opponents. “There were some pretty good teams, especially at the state tournament,” he said.

Many of the team members on the roster have been Snappers for several years, and some have been on the same team since they started playing tee ball.

The team members and coaches were presented with Citations of Congratulations from Representative Brad Boles and the Oklahoma House of Representatives.

“In the end, I’m really happy and satisfied with what they were able to accomplish this season,” Ortega said.