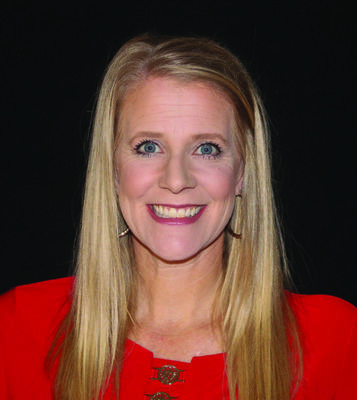 Central High School mathematics teacher Brigit Minden is no stranger to accolades, having received several awards in her 10-year tenure with the district. This week, however, she was notified that she was one of two STEM teachers in Oklahoma selected to receive a Presidential Award for Excellence in Mathematics and Science Teaching (PAEMST) from the National Science Foundation.

Minden was notified of her nomination for the award and began the lengthy application process in November of 2018. The application involves submitting teaching videos, lecture samples, and a five-page paper outlining her educational process. She finally submitted the application in May of 2019.

She was notified last fall that she was selected as one of the five state finalists for Oklahoma. Only two finalists are selected for the Presidential Award from each state.

“I’m passionate not only about teaching, but about showing that even though we’re a small school, we can do big, great things,” Minden said.

Central High Principal Wendy DeIorio echoed that sentiment. “To be named the top educator in mathematics within the state is a testament to not just schools within Oklahoma, but shows that truly remarkable educators can be found in rural and large school systems,” DeIorio said.

Each educator who is selected will be given a certificate signed by President Donald Trump and a $10,000 award from National Science Foundation. Awardees will also be invited to an awards ceremony in Washington, DC on a later date. The trip to Washington DC also includes the opportunity to participate in professional development with other STEM educators.

DeIorio said that Minden’s accomplishment is indicative of the culture at Central High Public Schools. “Central High has incredible teachers,” DeIorio said. “Teachers that strive to go above and beyond for their students. Mrs. Minden is a prime example of the standard of excellence our educators set for both students and colleagues…We are truly blessed an honored to have such remarkable role models for the students of Central High.”

Central High Superintendent Kevin Dyes, who began work with the District on July 1, said that although he had not worked long with Minden, he is impressed with her performance.

“What a great recognition and accomplishment for Mrs. Minden, an outstanding teacher leader, and a great honor for the Central High Public School community to have her as one of our teachers,” Dyes said.