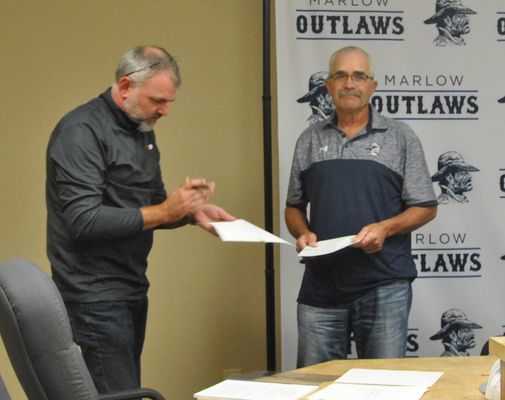 The new fiscal year and school year precipitated reorganization of the Board of Education for Marlow schools, bringing Cody Bannister to the president’s seat. Mark O’Neal will be Vice President; Darren Alaniz is the Clerk; Chad Choate is Deputy Clerk, and newly-reelected Terry Turner is the Member. Turner was sworn in at the meeting, beginning his third term on the Board.

The main focus of Monday’s meeting, however, was the schools’ plans for in-person and distance learning, which administrators had developed and finalized over the past four months and needed to be approved by the Board in order to be submitted to the Oklahoma Department of Education.

Teachers will report on August 10 to an unprecedented series of challenges brought on by the COVID-19 pandemic and shifting regulations and recommendations from the State and Federal levels. Approved learning plans for Marlow Public Schools and each campus are available on the school’s website: marlow.k12.ok.us.

During administrator reports, principals said that adjustments to the plans would be necessary throughout the school year, including during the first week.

Elementary School Principal Kim Kizarr said that she is working with Marlow Police Department to finalize plans for drop-off and pick-up of students at the Elementary school.

“I ask for grace and patience with this plan,” Kizarr said. “No parent is going to get out of their car, and there’s a lot of kids who stand at the door in the morning and that can’t happen.

Kizarr said that the plan is still in development and may include staggering pickup times in order to keep things moving and ensure the safety of all involved, including keeping surrounding streets from being blocked.

“It’s probably something we needed to do a long time ago,” Kizarr added. “This will be safer in the long run.”

Kizarr said that as soon as the traffic plan was finalized it would be communicated to parents.

Marlow High School principal Bryan Brantley said that the high school plans would “remain fluid” and that the faculty and staff were continually considering the best way to ensure the safety of staff and students.

Marlow Middle School principal Ross Ridge reported that because incoming sixth graders did not have the opportunity for orientation prior to school closing last spring, the first hour of the first day of school would serve as an orientation period for those students.

Ridge said that the school would be adding an additional bell to signal class changes to limit the number of students in the hallway at one time. “instead of 300 kids in the hall it’ll be only 100 at a time,” Ridge said.

“I’m ready to get some kids in to see what’s going to work and what doesn’t so we can fix it,” he added. “We can plan and plan but until we get in the middle of it we don’t know exactly what works. We have a good idea – we’re 99% of it will, but we’ll always have some tweaks, just like we do every year.”

Brantley echoed Ridge’s statement as it pertains to the high school. “I figure the first two days of school we’ll be doing meetings and trainings and ‘here’s how you get your temperature checked’ and ‘you go in these doors and out these other doors,’” Brantley said.

“You know who’s going to handle it the best?” Ridge said. “The kids. The kids are going to be fine.”

Elsewhere on the agenda, Superintendent George Coffman said that there would be a “Substitute Academy” on Wednesday to train potential substitute teachers for the health protocols.

After a brief executive session, the Board voted to hire Golden Brown to teach science at the Middle School and Debbie Klann as a bus driver/cafeteria worker.

Coffman also reported that Marlow Public Schools were accredited for the 2019-2020 school year with no deficiencies.