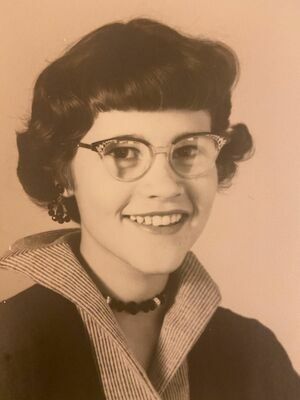 Mary Ella Hayes has laid down her warrior spirit and departed this life on Sunday, December 13, 2020, in Ardmore, Okla., at the age of 80 years, 11 months and 21 days. Mary lost her life in a brief battle with cancer. Funeral services will be held at 10:30 AM, Saturday, December 19, 2020, at Maranatha Freewill Baptist Church, in Ardmore. Interment to follow at Hillcrest Memorial Park, Ardmore, Okla.

Mary was born to Edith M. (Deal) and Fielding L. Grigsby Sr. on Saturday, December 23, 1939 at Marlow, Okla. Mary attended various schools in Texas and Oklahoma. While still in high school, Mary Grigsby and Doug Hayes were married October 26, 1957. Mary continued with her education and graduated from high school at Bray, OK in May 1958 and pursued some college education while raising her family.

Mary and Doug have been in Ardmore, Oklahoma for many years. Mary had been in the construction business, building and remodeling houses for about 30 years. She took on providing support to Doug when he started his Wire line business in the late 80s. They both continued working in both areas of work but when Doug retired in 2009 Mary scaled back in the construction business and she became more involved in providing rental property in the Ardmore area as Hayes Homes. Mary's only regret of losing her life is that she cannot continue to enjoy her immediate and extended family receiving all those hugs, squeals, and laughter. She will have to leave them behind but she is hopeful that she will be able to rejoin her family at a later time. And as you can see by the survivors listed, she was quite pleased with the Hayes family having so many family members that have been in her life. She had often said that each family member was very precious to her and Doug.

Mary is preceded in death by her parents, two brother; Don Grigsby, and Tony Grigsby, one sister, Nancey Ritter and one granddaughter, Sarah Hayes.

In lieu of flowers, donations in memory of Mary may be made to the Maranatha Freewill Baptist Church, PO Box 854, Ardmore, OK 73402 or to a charity of your choice.

Condolences may be left at griffinhillcrest.com.