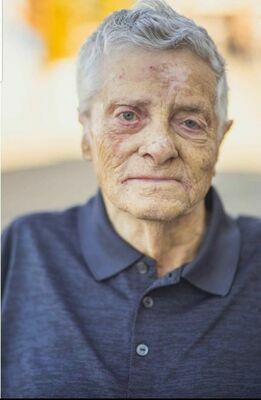 He married the love of his life, Wanda Fay Pierce on December 27, 1959 in Boise City, Oklahoma. Their love never wavered, and grew stronger throughout their 61 years together. They have three children who Everett loved dearly.

Everett graduated from Keyes High School, and was a member of Eastside Baptist Church.

When Everett was 7 years old, his life changed by a house fire. He lost his two sisters and a cousin in the fire; he spent almost a year in the Oklahoma City burn unit. He suffered a lifetime of physical pain- but never complained.

Everett trusted Jesus as his Savior and loved singing praises to his Lord. His ministry was singing in local nursing homes. His favorite hymn was "How Great Thou Art." It's comforting to know he is singing praises in heaven.

Everett was a hard worker and was a truck driver for many years. When he was 59, he almost lost his life to Melanoma, but he fought and Melanoma only ended up with his right arm. You would think that loss would have stopped him, but it didn't. His constant faith in Jesus Christ motivated him to tell anyone who would listen how God healed him and His promise to Everett that he would not die from cancer. God's Word held true. He would face many more cancer scares, but God never failed. Even after losing his arm, quitting was never an option; he learned to do things to remain independent. He enjoyed playing games, especially dominos and cards. He was a little ornery at times, and loved being with his family and friends.

His brother, CF (and Linda) David

His three children- Michael (and Annette) David of Arlington, TX, Tammy (and Michael) Dorothy of Winlock, WA, and Kelly (and Cynthia) David of Lacey, WA.

Everett was loved by all and will be greatly missed, but we are forever grateful for the life and example he led. "For to me, to live is Christ, and to die is gain." Philippians 1:21