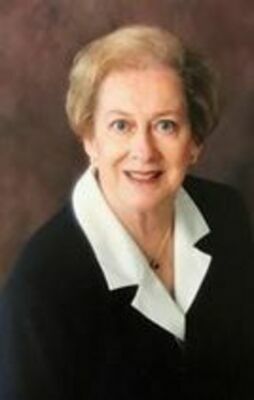 The loving life of Janis Wimberly Hruby, daughter, wife and mother of newspaper men has come to a peaceful closure on January 16, 2021. She was 89.

Janis was born in Altus Oklahoma on July 9th, 1931 and was the daughter of Harrington and Myrth Wimberly. Janis grew up in Altus, Oklahoma and moved to Washington DC in 1945 when her father was appointed by President Harry Truman to serve on the Federal Powder Commission. Janis graduated from Mount Vernon Seminary, Washington DC in 1949 and attended Goucher College in Baltimore, Maryland in 1950. She later moved back to Oklahoma to attend the University of Oklahoma and while there met the love of her life, Alexander Hruby who was getting his Master’s degree in Geology.

Janis graduated from the University of Oklahoma with a Journalism Degree in 1954 and was a member of Pi Beta Phi Sorority and the OU Student Senate. Janis also worked for the Resourceful Oklahoman, now the Oklahoma Today Magazine. On June 25, 1955, she married Alexander Hruby in Altus and moved with Al’s career in geology to Billings Montana, Denver Colorado and Jackson Mississippi until they landed back in Oklahoma to raise their two children in Duncan in 1965, where Al joined the family business working for the Duncan Banner.

Janis was a member of Philomathic Club, The Duncan Garden Club and P.E.O. She served, as President and Treasurer of Youth Services, various roles with Christians Concerned, the Mental Health Association, the Stephens County Historical Society and the Citizens Advisory Board for Child Welfare Services. She was also a member of the Pi Beta Phi Alumnae group.

Janis was deeply committed to her family, friends and the community. She was very involved in the First Presbyterian Church since joining in 1965 and served as an Elder and volunteer with the Youth Club and numerous committees over the years.

She enjoyed traveling with her family and friends to Europe, Mexico and Asia. She and Al also

participated in a National Newspaper study mission to Germany and Czechoslovakia. Her favorite spots though were trips to the mountains in Colorado and Santa Fe, New Mexico where she would meet her family and the Cousins Club. She and Al had a home in Keystone, Colorado and spent many years there enjoying summer golfing trips and winter skiing.

Janis’s family is forever grateful for the loving care given by Andrea Arrington, Willie Dean, Tina Spann and Ashley Savage.

In lieu of flowers, the family would ask for those to please consider making a charitable donation to The Katherine Anne Hruby Scholarship Fund through the Duncan Public School Foundation, PO Box 21210, Oklahoma City, OK 73156 or the First Presbyterian Church, 704 W Ash Ave, Duncan OK 73533

In light of the pandemic, the family will announce a Celebration of Life Memorial to honor Janis at a future date.