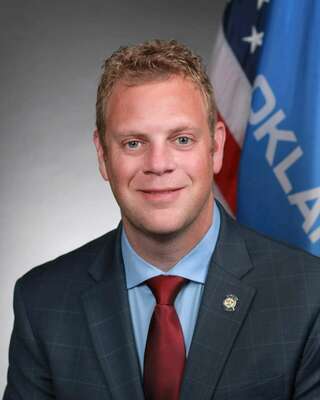 The House of Representatives hit the ground running this week.

In anticipation of Thursday’s deadline to pass bills out of their committees, there were dozens of committee meetings to finish hearing and voting on legislation. Bills must pass committee before they can be heard on the House floor, and I’m thankful that all eight of the bill I am carrying this year have proceeded in the legislative process!

I also had the opportunity to present two bills on the House floor this week, one of which I authored. House Bill 1059 addresses the significant backlog currently being experienced at the Dept. of Public Safety due to the challenges brought by COVID-19 and the implementation of Real IDs. The bill would allow local tag agencies to complete various administrative actions, such as renewing or updating a commercial driver’s license, to ease the burden at DPS and get Oklahomans their licenses faster. This bill also allows third-party drivers examiners to give driver’s exams versus having to wait for a long time to get an exam from a DPS location. I’m very glad the bill passed the House 91-2 and I look forward to working with Sen. Jessica Garvin of Duncan to pass the bill through the Senate!

The second bill I presented on the House floor this week was House Bill 2074, which is authored by Speaker Charles McCall. The bill is a vital piece of education reform and allows Oklahoma students to transfer from one public school district to another at any time during the year. It also would allow receiving districts to determine capacity limits for each grade level at the schools in their district while also maintaining local control by giving districts the power to deny a student with chronic absenteeism or discipline issues.

On Thursday, the House approved a bill and a resolution related to the 10th Amendment of the U.S. Constitution and states’ rights.

House Bill 1236 states that the Oklahoma Legislature may direct the Attorney General’s office to review any federal executive order, federal agency rule or federal legislative action to determine its constitutionality. House Resolution 1005 asserts Oklahoma’s sovereignty under the 10th Amendment by providing guidelines for federal government agencies and agents that operate within, or whose actions have an effect on, Oklahoma and its citizens.

Looking ahead to the next couple of weeks, we’ll spend the vast majority of our time on the House floor hearing and debating legislation.

It truly is an honor and privilege to represent House District 51. As always, I hope you contact me about bills you are passionate about or any concerns you have. My office phone is (405) 557-7405 and my email is brad.boles@okhouse.gov. God bless!

House Third-Reading Deadline in the Rearview by...