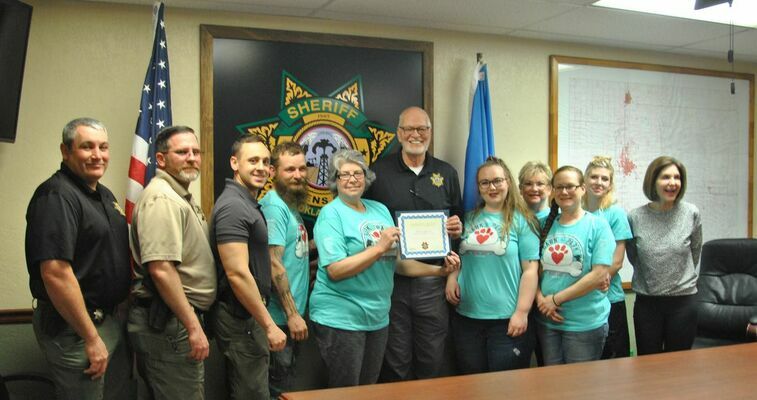 Stephens County Sheriff Wayne McKinney, center, presented volunteers and staff of the Stephens County Humane Society with a certificate of appreciation for assisting in the rescue of over 100 dogs discovered on February 12.

“I think we all remember that day,” McKinney said. “We got a call of a missing person at a home north of Marlow and when the deputies arrived, one of the things they had a concern about was all the animals…they looked and found out that there was an over-abundance of dogs in horrendous conditions.”

Temperatures on that day hovered in the teens and many of the dogs were exposed to the wintry elements.

At the same time, deputies were also conducting an investigation of the property and searching for a suspected murder victim, and did not have the capacity to handle the animals as well. McKinney contacted the Stephens County Humane Society for assistance.

“They responded with all the troops,” McKinney said. “To see those volunteers coming with hay for bedding, for windblocks for shelter, it really made me so thankful for where we live in this county.”

The certificate reads, “In appreciation of your caring staff, overwhelming support, and quick action causing the rescue of numerous endangered dogs on February 12, 2021.”

The dogs were taken to Tulsa the next day for assessment and care.

The homeowner, Karen Jean Pritchard, was charged with second-degree murder of Ashley Nicole Anderson and 112 counts of animal cruelty. McKinney said that Pritchard is currently released on $1 million bond.