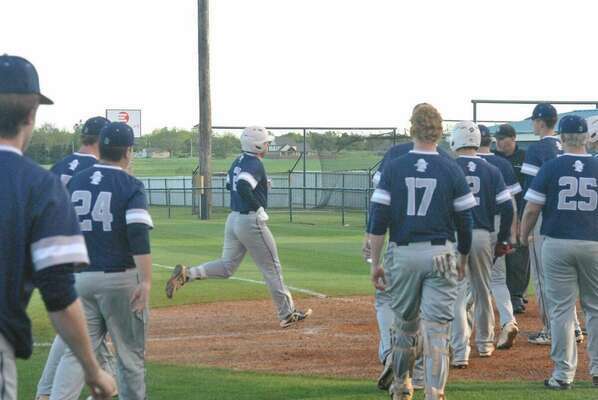 The Marlow Outlaws are bound for Class 3A baseball regionals after sweeping their Bi-District series, 9-0 and 7-2, against the Seminole Chieftains on April 29.

The first game had three Outlaw pitchers teaming up for the shutout win, with Brennan Morgan leading off. Morgan pitched five innings and allowed five hits, striking out seven. Cooper Smith took the mound in the sixth, striking out two. Will Bergner finished up in the seventh with one strikeout.

With two outs in the bottom of the sixth, Seeley scored on Smith’s hard ground ball to left, starting a rally that led to three more runs by HOLDING, Payne, and Bergner.

The Outlaws scored one more, with Seeley coming home on a line drive by Herchock.

Game two saw Herchock on the mound for five innings, giving up two runs on seven hits and striking out three. Seeley came in as relief out of the bullpen and struck out two.

Marlow’s first run came in the first inning, when Brennan Morgan scored on a ground-out by Smith. Jace Gilbert stole home in late in the top of the second to make the score 2-0.

Morgan hit a solo homer early in the third, followed by two more runs by Herchock and Payne. Herchock came in on a line drive double by Payne, and Bergner hit a line drive single that brought Payne home on the next play.

Seminole’s two runs came in the third and fifth, but Marlow answered both with runs by Tyler Callahan in the fourth and Smith in the seventh.

The Outlaws play at Regionals in Weatherford on Thursday at 1:30 against Elgin.