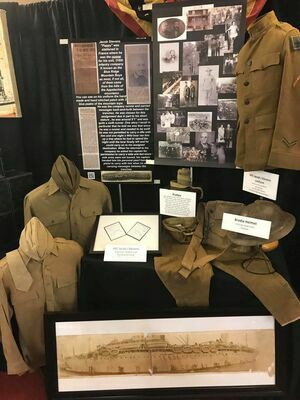 Visitors to Marlow’s annual Fourth of July celebration will have a new opportunity to experience history when the traveling exhibit, “Awakening the Mind: World War I Remembered” opens on July 3 at the Marlow Senior Citizens Center on Main Street.

The exhibit, curated by Keith Colley, features 14 booths covering different aspects of WWI history and includes artifacts that Colley has collected via auctions and donations.

Originally intended to engage residents at Veterans facilities and senior centers, the “mobile museum” has grown into the largest World War I traveling museum in the world and expanded to display at events across the country.

Colley said that over 220,000 people had visited the exhibit and taken the guided tour, but that the onset of the COVID-19 pandemic and restrictions had forced him to cancel 238 shows in 2020 and 2021.

“The event in Marlow will be the first opportunity for it to be seen post-COVID,” Colley said.

“Awakening the Mind” not only shows World War I through photos, text, uniforms, and stories, but also personal items from the soldiers who fought.

One example is an old Gilette safety razor that was donated to the museum. Colley said that a visitor once asked to hold it, explaining that his father had brought home a similar razor from the war.

“The elderly gentleman told me that his father had taught him to shave using that razor, and it was the only time his father spoke about the war,” Colley said.

Colley said that most of the journey through the fourteen booths is a drab sepia tone that emulates the struggle of the soldiers and the families at home, but the final booth – the “Victory Booth” is a celebration of patriotism and the end of the war.

Colley said that visitors to the Marlow Senior Citizens Center should allow an hour to fully experience the exhibit and guided tour.

“There’s a backstory to everything there,” Colley said.

“Awakening the Mind: World War I Remembered” will be open beginning at 10am on Saturday, July 3 and will remain open all day for visitors. It will also be open on July 4 and 5 from 1pm – 6pm. There is no charge to view the exhibit, but donations are accepted.

Marlow Cross Country “Runs for Each Other” and ...