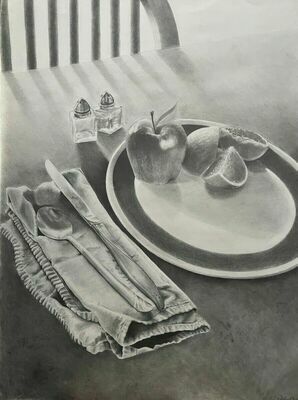 “Still Life in Graphite” by Alayna Hill, of Marlow

Congressman Tom Cole recently announced the 2021 winners of the Congressional Art Competition for the Fourth District of Oklahoma. Throughout the artwork submissions period this spring, Cole’s office received more than 100 entries from high school artists. All entries were judged by Dr. Victor Youritzin, Professor Emeritus of Art History at the University of Oklahoma, who helped select the first-place winner and determine five finalists for the first ever “People’s Choice” contest.

Alayna Hill of Marlow has been named the first-place winner. The daughter of Steve and Kristen Hill, she is a homeschooled student and just completed the 10th grade. As part of the grand prize, Hill’s artwork will be on display in the Cannon Tunnel of the U.S. Capitol Building during the next year, along with other congressional district winners from across the nation. A reception for all top prize winners in the nation’s capital is expected to take place in the coming months.

“I am delighted to congratulate Alayna Hill as this year’s Fourth District of Oklahoma winner of the Congressional Art Competition,” said Congressman Cole. “Her winning artwork is not only beautifully done, but the message behind it is a simple yet meaningful reflection on life. I am very impressed by her artistry and look forward seeing her masterpiece on display in Washington throughout the coming year.”

Hill titled her winning drawing Still Life in Graphite, and it was composed using medium 2B pencil.

"For me, this piece is representing something that feels normal in this crazy world. People have been making, and painting, still lifes for thousands of years. Just because life turned kind of upside down and right again, it doesn't mean normal life can't go on. It's not the most inspired piece I have made, but it doesn't need to be. It is a little bit of peace on paper," Hill said.

To determine the two runner-up winners, Cole’s office for the first time conducted a “People’s Choice” contest online. It was promoted through Cole’s social media channels with votes collected on an online form over the course of one week. Out of the more than 900 votes cast, artwork created by Joe Whitten and Alaura Drake received the most.

Both students attend Southmoore High School, where they study art with Heather Bradbury. Whitten just completed the 11th grade, and Drake just completed the 12th grade. As the Fourth District’s “People’s Choice” winners, their artwork will be displayed in Cole’s Norman office during the next year.

“This year, I was delighted to ask constituents to help my office choose our first ever ‘People’s Choice’ winners,” said Cole. “I am pleased to congratulate Joe Whitten and Alaura Drake on taking home the titles. Their artwork was clearly favored by hundreds of people, and my staff and I look forward to admiring their colorful masterpieces on the walls of my Norman office over the next year.”
The first-place winner and a guest will receive free airfare to Washington, D.C. for the national winners’ reception and award ceremony expected sometime this year.