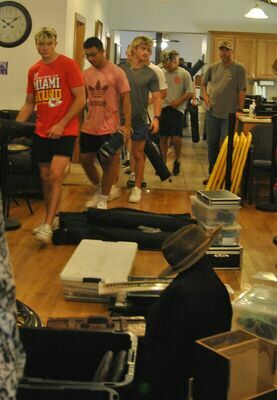 Members of the Marlow High School wrestling team volunteered with set-up and tear-down of “Awakening the Mind: WWI Remembered” at Marlow Senior Citizens Center on Friday and Tuesday.

“Awakening the Mind: WWI Remembered,” a mobile museum exhibit that set up in the Marlow Senior Citizens Center, was a new feature for Marlow’s Fourth of July celebrations and director Keith Colley said that he was “thrilled” with the turnout.

Colley estimated that the exhibit saw 700 visitors throughout its three-day display at the facility on Main Street.

“It was a lot of work but it was worth it,” Colley said.

Not only did the exhibit see steady traffic on Saturday during the city-wide celebration, but the two subsequent days were busy as well. On Monday afternoon, which was the observed holiday for many, Colley said that he had several people waiting outside the building prior to its scheduled opening time of 1pm so he opened early.

“Monday we had a lot of families,” Colley said. “I do an exercise to engage kids where I tell them about how what we know as the modern-day cell phone existed during World War I, just in different parts. The kids have a good time going through the exhibit to find all of the different parts of it.”

The mobile museum will return to Marlow in time for Veterans’ Day in November and will be open to the public as well as special tours for Marlow Public Schools students.

Colley said that he also met with other organizations from out of town that want to get on the museum’s traveling schedule, including the City of Geronimo and the Lawton Historical Society.

“It’s opened all kinds of doors after being closed for sixteen months,” Colley said.