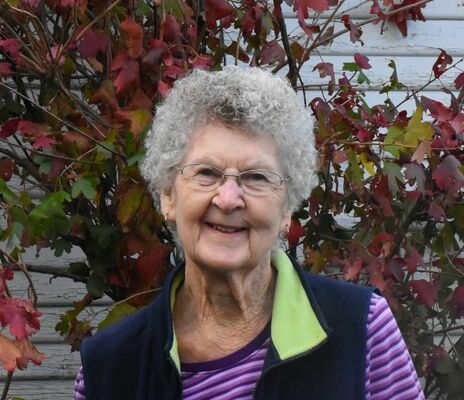 Jeanette Harper, after a full life of devotion, love and faithful service,

Jeanette Burt (Louise Jeanette) was born in Elk City, Oklahoma to Guy Ernest Burt and Gladys Marie (Stice) Burt on the 23rd of March, 1931. She was raised in Lakewood, Colorado.

Jeanette was a naturally gifted musician, and was also trained in piano and tap dance. While they were young children during the Great Depression, she and her brother Gerald worked as a vaudeville style act, with Jeanette playing accordion and Gerald singing. She later worked at the family’s cafe and attended College at Loretto Heights where she briefly studied nursing.
After leaving college she went to Sterling, Oklahoma to visit family. While there she met Jerry Lee Harper, who was home on leave from the Navy. After a short courtship, Jeanette and Jerry were married in Sterling, Oklahoma on March 13, 1953. They were married for 65 years and were parents to five children.

Jeanette was a devoted Christian and a loving wife and mother.

Mites Society for many years. She enjoyed music, sewing, embroidery,

than any of that she enjoyed her family.

Jeanette was a homemaker while the children were small, but

also worked outside the home after her children were older. She

worked as a telephone operator at AT&T, a musical aide at

Moffat County Schools, and as a private piano teacher.

She was preceded in death by her parents, her husband, her

Survivors include her children: Kathleen (Jeff) Harper, Suzanne (Bill) Burns, Wesley Harper, Cynthia (Andy) Chotvacs, John (Marsey) Harper, four grandchildren: Katherine (Justin) Thompson, Cristen (Clint) Jantz, Bryon (Katie) Smith, Janis (Jake) Harper and four great-grandchildren: Tessa, Elijah, Lillian, and Grant.
A memorial service will be held at the First Christian Church on Saturday, July 17th, 2021, at 11 am, in Marlow, Oklahoma. Her ashes will be interred in the family plot at the old Rush Springs Cemetery.
Donations can be made to Wounded Warriors or any charity of choice.