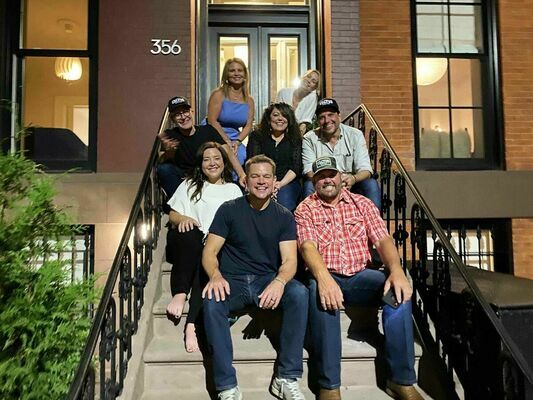 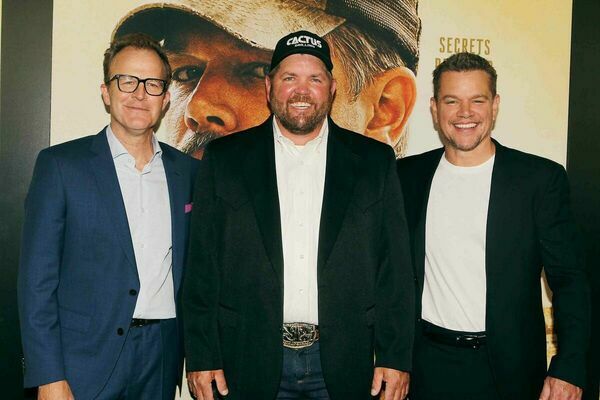 Tom McCarthy, Kenny Baker, and Matt Damon on the red carpet at the premiere of the film “Stillwater” in New York City on Monday. Photo courtesy of Kenny Baker
Previous Next

Kenny Baker is known to many in Marlow as one who is always willing to help in the community, whether it’s removing a tree that threatens to fall on a home or volunteering to be the auctioneer at a school fundraiser. So it should come as no surprise that when Baker got a call in March 2019 to advise a production team for a blockbuster film with ties to the oil and gas industry, he said he’d help out.

“I didn’t know anything about it, just that someone from New York was going to call,” Baker said.

The call came from the assistant to Oscar-winning film director Tom McCarthy, who set up an appointment to meet Baker along with cinematographer Masanobu Takayanagi. They met in the parking lot of a grocery store in Rush Springs.

“They were interviewing a lot of people to do what I ended up doing,” Baker said. “They were doing research on roughnecks, oil people, for a movie. That’s all I knew. But I was fine with helping.”

Baker and his long-time friend Ryan Stuart arranged to give production staff and the lead actor tours of small towns and oil rigs around the state.

“They were telling us they’d set up the tours and everything but I knew that was just going to be a big old hassle,” Baker said. “So I told them, ‘Let us make the plans and we’ll come pick you up. I’ll get some people down here and we’ll have a cookout in my back yard.’”

Baker had to be tight-lipped about the process, only telling those invited that there would be some filmmakers coming to do research on the industry.

“My wife kept asking who the lead actor was,” Baker said. “We finally found out that it was Matt Damon.”

Baker said that the Oscar-winning actor arrived and immediately started playing football with several boys who were in the back yard.

“He pulled up to the house where we had a fire going and were cooking some steaks, and before he did anything else he started throwing the ball around with those boys,” Baker said. “He was just a good guy.”

The party continued after supper, when the group went out to the pasture to shoot skeet. Afterward, Baker’s daughter Madison brought out her guitar and she and a friend started singing.

The cookout with Damon started Baker on the road to assisting the actor with his performance in “Stillwater,” a film about a father (Damon) who travels from Oklahoma to France to help his estranged daughter (Abigail Breslin), accused of a murder she claims she didn’t commit.

Baker advised Damon on many aspects of his performance, helping the actor adopt the mannerisms of his role as an oil and gas worker.

“How he walks and talks, the stories he tells, that’s a lot of me in that character,” Baker said.

In interviews, Damon has credited Baker with making his performance authentic.

“He’s a great guy,” Damon said in an interview with CBS Sunday Morning. “We’d call him throughout the shoot, maybe tweak a line of dialogue…it’s very helpful to have an expert in your corner.”

Baker attended the film premiere in New York City on Monday night along with his wife Monica and daughter Madison, and said the experience was “overwhelming.”

“We were on the red carpet and everyone was flashing pictures,” Baker said. “I did the red carpet with Matt and did an interview with the New York Times.”

McCarthy and Damon spoke to the audience before the film was shown and gave Baker a shout-out for his work.

Baker said that the best part of working on the film was making a lot of new friends.

“Matt and Tom and I text all the time,” Baker said. “Plus there ain’t too many people who can say they’ve been on the roof of Matt Damon’s apartment.

“Matt, though, he’s just a normal guy,” Baker added. “He’s a good old boy. Just from different circumstances than me.”