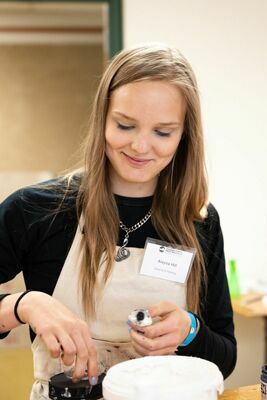 When New York City-based artist and professor Dean Irby tells his colleagues he’s going to teach in Oklahoma for the summer, some respond in disbelief. Returning for his third stint as acting instructor for the Oklahoma Summer Arts Institute (OSAI) — attended this year by Alayna Hill from Marlow — the veteran of stage and screen gave his answer to these big-city skeptics during a recent faculty presentation for students and staff.

“[OSAI] is one of the best intensive arts programs in the country — bar none," he said.

This summer, Hill joined an elite group of 262 high school students from every corner of the state as they developed their individual talents at Oklahoma’s Official School of the Arts. Held this year at the University of Science & Arts of Oklahoma (Science & Arts) in Chickasha, Hill was accepted through a competitive statewide audition process to study Drawing & Painting in this unique and prestigious educational program, held July 10-25.

“OSAI was a really great experience. I learned to loosen up in my art form,” Hill said. “I've been a strict perfectionist for as long as I can remember, and OSAI helped me start to break free from that. The teachers and students were all amazing.”

OSAI students like Hill make art and memories with peers from across Oklahoma, led by nationally renowned faculty in the literary, visual and performing arts. Now in its 45th year, the Institute has been providing world-class arts instruction to the state’s most talented high school students in an immersive, multidisciplinary environment for nearly half a century. Students study for six hours per day in one of eight disciplines, including acting, chorus, dance, film & video, creative writing, drawing & painting, photography and orchestra. Evening performances, faculty showcases and demonstrations allow students the opportunity to interact with and learn from other disciplines.
Each student accepted to OSAI attends on full scholarship, ensuring that financial need is not a barrier to participating this life-changing summer arts program. Students study, reside and build community during their two-week experience, creating lifelong friendships and setting a course for future engagement with the arts.

Past OSAI faculty artists have included winners of the Pulitzer Prize and the Academy, Grammy, Emmy and Tony awards. This summer, 41 faculty artists provided training and instruction to Oklahoma’s most gifted young artists, helping them refine their skills and build confidence in the process.

Orchestra conductor Allen Tinkham and creative writing instructor A.J. Verdelle were among the notable faculty at this year’s Institute. Tinkham is in his twenty-first season as Music Director of the Chicago Youth Symphony Orchestras (CYSO), which he led in its Carnegie Hall debut, first live broadcast, first recording release and seven international tours. Verdelle is a PEN/Faulkner Award, IMPAC/Dublin Literary Award and Los Angeles Times Book Prize finalist, whose memoir about her relationship with Nobel Prize-winning author Toni Morrison will be published by Harper/Amistad next year.

“For more than 40 years, our agency has supported the work of the Oklahoma Summer Arts Institute as it has provided life-changing opportunities for Oklahoma high school students,” said Oklahoma Arts Council Executive Director Amber Sharples. “It is hard to overstate how important this distinguished program is for young people with a passion for the visual, literary and performing arts. It is also difficult to overstate how important the program is to building Oklahoma’s reputation nationally for producing creative talent.”

Due to social distancing considerations and ongoing renovations at its permanent home at Quartz Mountain State Park in southwestern Oklahoma, Institute leadership made the tough decision to relocate OSAI 2021 and was thrilled to be warmly welcomed by Science & Arts in Chickasha. Celebrating more than a century of service as Oklahoma’s only public liberal arts college, Science & Arts is a recognized leader and innovator in interdisciplinary studies.

The Oklahoma Arts Institute (OAI) is a private, nonprofit organization founded in 1977, with a mission to provide exceptional multidisciplinary arts experiences that develop individual talent and inspire a lifelong passion for the arts. In addition to the Summer Arts Institute, OAI administers a series of continuing education workshops for adults every fall.