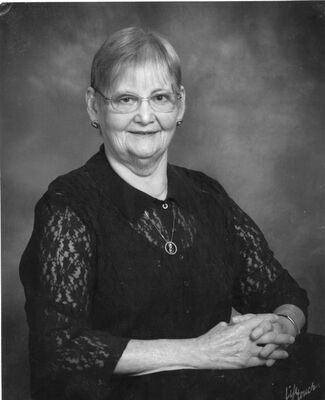 Graveside services for Bessie R. (Payette) Sullivan, 82, of Duncan will be held at 10:00 am on Thursday, Sept. 9, at the Sterling Cemetery. All arrangements have been entrusted to Callaway-Smith-Cobb Funeral & Cremation Services of Marlow.

Bessie R. and her twin Jessie C. Payette were born September 5, 1938, on the farm south of Sterling that was homesteaded in 1901 by their great grandmother Lou Barbe. Bessie passed to her eternal home on Friday, September 3, 2021 in Duncan.

Bessie attended Sterling Schools until 9th grade when her father, Rev. Clair Payette, accepted a pastorate at Bethel Methodist Church. Bessie graduated from Roosevelt High School in 1956 and entered Cameron Junior College in Lawton. In June 1958, she married Robert Sullivan of Sterling and transferred to the University of Oklahoma. At the age of 21, she graduated from OU and began her teaching career.

Bessie was selected to help develop and model Lawton's first public school kindergarten program. Later, she completed a Master's at OU in Special Reading Instruction, which she taught at Sterling until her retirement in 1995.

Bob and Bess had three daughters and then added five more children to their family.

Bessie was a faithful member of the Sterling Methodist Church her whole life.

She was a very accomplished seamstress, making many of her kids' clothes. She was a 4-H leader and taught her children to sew, which led to them winning many awards. As a leader, she took her children and many others to various competitions all over the state of Oklahoma.

Bessie frequently hosted holiday and special occasion gatherings for family and friends, especially former schoolmates. She would always make sure everyone else had a plate before she got one for herself.

Bessie was known for being friendly, telling everyone she encountered about her family, particularly how proud she was of each grandchild and great-grandchild. She also loved traveling with her husband, Bob. Together they experienced many adventures all over North America, Central America, and Europe, often traveling with classmates Gehrig and Dorothy White.

Bessie was preceded in death by her daughter Deborah Ray and son Duane Sullivan, her two brothers Jessie and David Payette, and her parents Rev. Clair and Birdie Payette