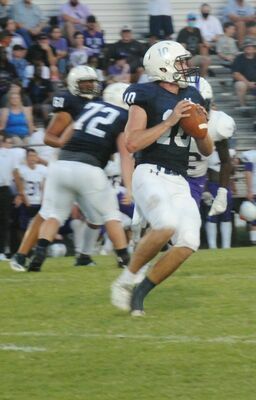 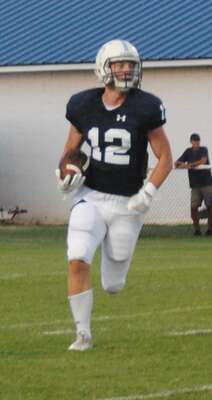 The Marlow Outlaws chalked up their first big win of the season in their home opener against Chickasha on Friday. The game marked the first Marlow win vs Chickasha at Outlaw Stadium since 1993 and ended a six-game Chickasha winning streak at Marlow.

Not only did the team take a 40-14 win over the Chicks, but Seniors Jace Gilbert and Will Bergner achieved two personal records – 3,000 passing yards for Gilbert and 1,000 career receiving yards for Bergner – on the same 30-yard pass in the first quarter.

Head coach Matt Weber said that although it was a big win for the Outlaws, the team wasn’t getting complacent.

“We put up a lot of points, but then you go back and see some film and there some mistakes,” Weber said. “But you know, mistakes are easier to fix after a win than a loss.”

Gilbert continued to dominate in kicking and punting, with five field goals and 2 punts for 79 yards. All seven of Gilbert’s kickoffs were out of the end zone for touchbacks. Gilbert and his “golden foot” also hit a 37-yard field goal for the first score of the game.

Bergner’s 30-yard reception with 5:23 left in the first quarter not only got him the 1,000-yard marker but also scored a touchdown for the Outlaws. Gilbert’s point-after kick made the score 10-0 at the end of the first.

Just into the second quarter, Chickasha’s snap through the end zone gave the Outlaws a safety; just two minutes later, Josiah Johnson took a 21-yard pass from Gilbert for a touchdown and a 19-0 lead. Julian Marroquin got his hands on the ball next for a 10-yard run into the end zone to bring the team up 26-0 at the half.

Marroquin again saw the end zone in the third quarter after some big runs by William Hewitt got the ball to the two yard line, followed by a 1-yard run by Brian Zhang for a touchdown to end the quarter 40-0.

Chickasha finally saw Marlow territory in the fourth quarter with a five-yard run by Ronald Givens and a point-after by Price Molder; with less than a minute left Malachi Paukel took a pass from Landon Bowen for a touchdown, followed by Blayden Fewell’s kick to give Chickasha 14.

Marlow will host Anadarko for the second home game of the season on Friday. The Warriors lost to Elgin last week, 55-41. Last season, the Outlaws and Warriors met at Anadarko; the hard-fought 21-20 victory by Marlow was a key point in the Outlaws’ momentum through their historic 11-1 season.

Friday’s game will feature a tribute to first responders and military personnel. Superintendent George Coffman said that a helicopter will deliver the game ball to the field before kickoff, and half time will feature a special program to honor the service of police, fire, and medical personnel as well as those who have served or are serving in the military. Long-time Outlaw supporter Jason Freeman, who passed earlier this week, will be honored as well.