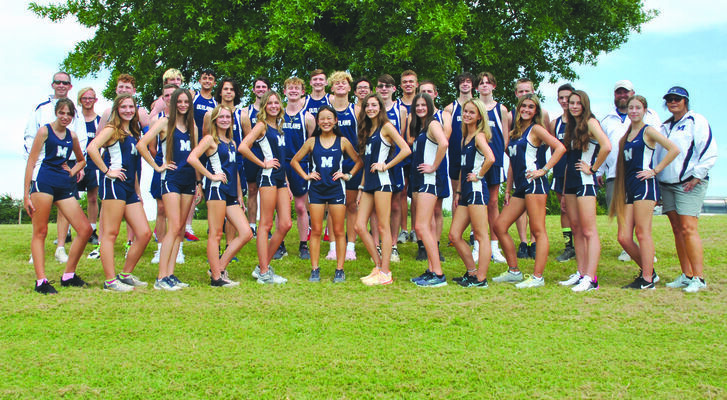 Both boys’ and girls’ cross-country teams took second at the Anadarko meet on Friday, September 17, including another first-place run by senior Korie Kizarr.

“[She] once again came out and dominated the field,” Head Coach Mikey Eaves said. “Korie is really running great right now and we look forward to seeing her in the remainder of the season.”

Eaves said that despite some challenges – one top 5 runner was not available and another was injured during the race – the Lady Outlaws had a great showing at the meet.

“We ended up getting second place in the meet, which I am super proud of,” Eaves said. “We look forward to a great week of practice before our meet in Velma next Tuesday.”

Eaves said that Kyah Blundell was running well prior to her ankle sprain and was in the top 10 of the field up until that point.

He added that Skylar Ramsey, who also finished in the top 20 of the girls’ run, is a strong runner. “She is really stepping up to make a huge impact on this year’s team.”

Assistant Coach Matt Ivory said that this was the first time Marlow had run at Anadarko in recent years.

“The course ended up being 1-2 minutes too long but there was really good competition, including Heritage Hall who is ranked #3 in our class,” Ivory said. “Our guys really took on the challenge and competed well against them.”

Three of the top twenty finishers in the 3.1 mile run were Outlaws: Ean Hewitt, Tyler Brown, and Caleb Sloan. Daniel Aguilar and Luke Tolle rounded out the top 5 finishers for Marlow.

“Ean Hewitt has been so steady all year and the fitness that he has from his summer training is really starting to show,” Ivory said.

The coach also said that the hard work the Outlaws put in during practice is paying off for the team, and that they have their sights on another State Championship.

“I think they are starting to believe that they can repeat again this year if they keep working as hard as they are in practice,” Ivory said.

The top 5 runners were different from previous meets, and Ivory counts that as a benefit for the team’s versatility and talent.

“These guys are really pushing each other and the battle for the varsity team is heating up. Regardless of who actually wins those spots, it’s that competition that will make us what we are at the end of the year,” Ivory said.

Both coaches agreed that running at Anadarko allowed the teams to face other schools that they usually don’t see until post-season.

The Outlaws will run next at Velma-Alma on Tuesday, September 28 at 4pm.