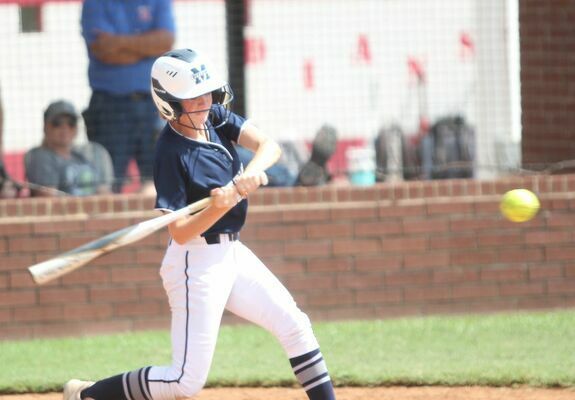 Alisha Lemons gets ready to make contact for the Marlow Lady Outlaws softball team in a victory over the Empire Bulldogs on day one of the Comanche Festival. Photo courtesy of Andy Morphew/The Duncan Banner

The Marlow Lady Outlaws softball team are third in Class 4A District 3 after an 8-7 win on Tuesday over Pauls Valley, thanks to a walk-off double by Jillian Totten in the bottom of the seventh.

Pitcher Jori Brittain earned the win for the Lady Outlaws, allowing ten hits and seven runs over seven innings, striking out six and walking one.

Pauls Valley got on the scoreboard after two outs in the first inning, starting with a run on an error by third baseman Abi Olivier and a follow-up single RBI. The Lady Panthers scored again in the top of the third for a 3-0 lead.

Marlow answered loudly in the bottom of the third inning, scoring four to take the lead. First, Dara Hunt singled on a ground ball to center to bring Bateman home and advanced Kenlee Wilson to second. Whitney Wade grounded into fielder’s choice to fill the bases, followed by a walk by Olivier that brought Wilson home. Hunt scored next on Allye Haile’s at-bat, after which Haile hit a single to bring Wade in. The inning ended with Marlow up 4-3.

The Lady Outlaws inched closer to closing the gap in the bottom of the fifth when Totten reached on an error and Chloe Boyster and Haile were able to score to make it a one-run deficit.

Totten’s game-winning double came in the bottom of the seventh when, with two outs on the Lady Outlaws and Kentley Davis and Lemons on base, her fly ball to center allowed Marlow to take the lead and end the game.

The win came after a successful showing at last week’s Comanche Festival, where the Lady Outlaws won 4-3 over Davis, 4-1 over Empire, and 12-2 over Waurika. Their sole loss was to Walters, who won 5-1 in Saturday’s final game.

Marlow plays two more at home, on Thursday vs Plainview and on Monday vs Comanche, before traveling to Lawton MacArthur on Tuesday, September 28. They’ll return to their home field on Thursday next week to host Duncan and on Monday, October 4 against Elgin before Regional play begins on October 7-8.