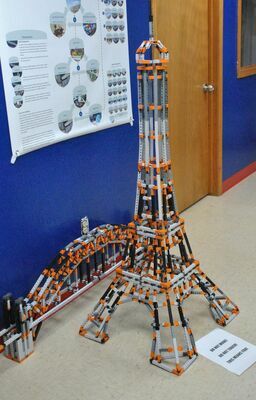 A bridge and a model of the Eiffel Tower are two projects on display in Bray-Doyle’s STEM lab. Photo by Elizabeth Pitts-Hibbard/The Marlow Review

An unexpected budget surplus at Bray-Doyle schools cleared the path to create a new program for students to focus on STEM under the direction of math teacher Kyle Holman.

Holman said that he was approached by Superintendent David Eads and high school Principal James Vines, who encouraged him to explore opportunities for a program geared toward science, technology, engineering, and math (STEM) at the school.

“We took a trip where we went to a few other schools in the state where they have a STEM program,” Holman said. “One of them had a program called Creative Systems Learning, and I thought it was awesome.”

The Bray-Doyle STEM lab consists of twelve different computer stations, each where two students work together to complete projects every two weeks. The students pair up at the beginning of the school year and continue rotating through each station throughout both semesters.

“They have ten days to choose their project, research it, complete it, and do a slide presentation for the class,” Holman said.

One example is a station where students learn about software engineering and can choose from several projects on that topic. The two-student team was working on a program called App Inventor, in which the students learned to develop a phone app.

Holman said that the fast pace of cycling through the stations could be a challenge, but that the goal was to continually develop knowledge through STEM.

“They only have ten days, and 45 minutes per day of class time,” Holman said. “But failure to complete a project is not a failure. Failure to learn something is a failure. That’s the key.”

Other stations include video production, solar engineering, satellite mapping, robotics, bridge building, and 3-D printing. Because each station offers several different projects, students who cycle through them do not repeat a project even if they take the class multiple years.

Students not only collaborate with their teammates, but with other teams to solve problems.

Senior Ashleigh Ruthstrom said that she planned to use what she learned in the STEM program in her future career as an EMT. She and her teammate were putting the finishing touches on a solar car.

“We had to do a lot of problem-solving and figuring out why something didn’t work,” Ruthstrom said. “We wanted to use popsicle sticks or cardboard for the frame, but we ended up using paint stir sticks.”

Ruthstrom also learned about teamwork from the program.

“We have to work together to troubleshoot and use our ideas to see what’s going to work,” Ruthstrom said.

Holman said that he sees himself as a facilitator more so than an educator in the STEM lab.

“I have a rule that says, ‘Ask Three Before Me,’” Holman explained. “I don’t know how to do everything up here, and I don’t intend to know. But next week, these teams rotate through the stations and if someone runs into an issue they can ask the students who did it before them. ’Asking three’ means that they can look it up, they can see if there’s instructions online, they can use the software or ask other students all before they come to me with a question,” Holman said.

The program is currently offered in two class periods per day with a limit of 24 students per class.

Holman said he would like to set up a sort of display case at the school so that particularly interesting projects could be shown to other students.