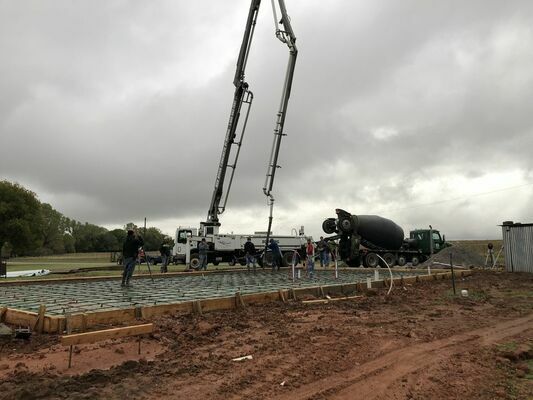 As Marlow City Council closed out the cemetery roads project, work has begun on the new Marlow Cemetery building project. As of Wednesday morning, concrete was being poured for the building’s foundation.

Marlow City Council made short work of the agenda at their regular meeting on Tuesday and the Municipal Authority trustees heard an update from City Administrator Jason McPherson on the Transmission Pole Replacement Project.

In Council business, the group heard from Treasurer DB Green regarding the budget thus far in the fiscal year.

“We’re 25% through the year,” Green said. “Kind of looking at it on a straight-line basis, our cash is holding up good…the general fund is balanced out almost to the penny in regards to collections and disbursements.”

“After three months, if we can continue that for nine more, that’ll be a victory,” Green said.

The Council approved a lot split request from Kim and Brendon Davis for 815 W. Kiowa. The request went before the Planning and Zoning Committee earlier this month and was recommended for approval.

“We’ve received the first half of those funds last week, and it’s recommended that we keep those funds separate,” McPherson said. “The amount will eventually spurn another audit, so we need to keep that all separate and accounted for.”

The City will accept grant funds for the Marlow Fire Department for gas monitors and radios. The grant, given by OneOK, is for $9,830.

Councilors also approved the purchase of a 2015 Dodge Ram pickup for $21,774. McPherson explained that purchasing the vehicle locally rather than on state contract was a better deal for the City, and that it would be used primarily for Code Enforcement.

“If you’re going to have a Code Enforcement Officer, you need to have a code enforcement vehicle,” McPherson said. “It lends more credibility to the job.

“We were going to get it on state contract but the 2022 numbers came out and they went way up, so we found this one.”

Council member Joe Marcano remarked, “These days if you can find a pickup and you like that pickup and the price is reasonable, you’d better hurry.” The Council approved the purchase.

In his City Administrator comments, McPherson addressed confusion regarding Halloween, which falls on a Sunday this year.

“We actually don’t make decisions on when Halloween is,” McPherson said. “It’s October 31 and it’s on the calendar, it doesn’t make a difference what day it’s on.

“The confusion comes from the Fourth of July, which we kind of move around to help us,” McPherson added.

During the Council comments, member John Rich asked for an update on the renovation at the Marlow Community Center. McPherson said that the Nutrition site housed there would be open for inside dining on Monday and that the building would be available to rent in a few weeks.

“We do get calls quite a bit about renting the building,” McPherson said.

Although the MMA agenda contained no items of business to be voted on, the Trustees heard from McPherson regarding the Transmission Pole Replacement Project after Rich asked for an update.

McPherson said that 15 of 39 poles had been installed, but the order in which the poles were planned to be replaced would be adjusted.

“We were planning next to do three poles that will cause an outage that will take the whole county down,” McPherson explained. “We’ve been working with Oklahoma Municipal Power Authority and AEP on a plan for that.”

AEP is planning to rebuild its transmission line, including an automated switch where the power connects to Marlow.

“That switch really is necessary because it will isolate us from Duncan and Rush Springs,” McPherson said. “If we take the outage, we’ll take part of Duncan and all of Rush Springs with us.”

Because AEP plans to perform the rebuild in fiscal year 2024, the City will delay replacing those three poles and instead choose five others to replace beforehand, or could pause the project if the budget required.

“We could actually skip a few years if we wanted to because the line is stable enough with the new poles we’ve done,” McPherson said. “We do want to finish this project, but we’ve gotten to where we can buy ourselves some time if we need to.”

McPherson added that although the project will require an outage at some point, it will not happen for at least three years.