Marlow Cross Country “Runs for Each Other” and Two Regional Championships 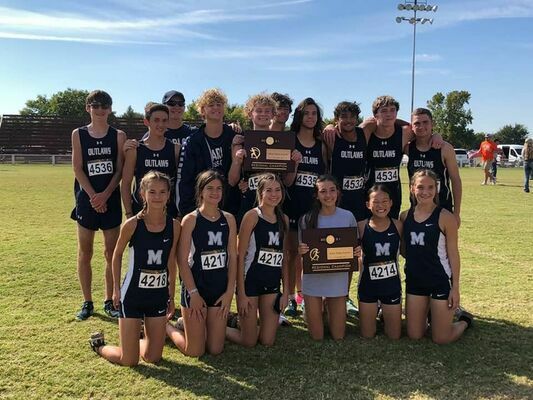 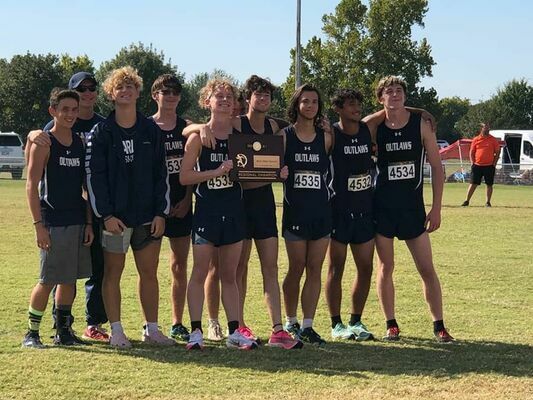 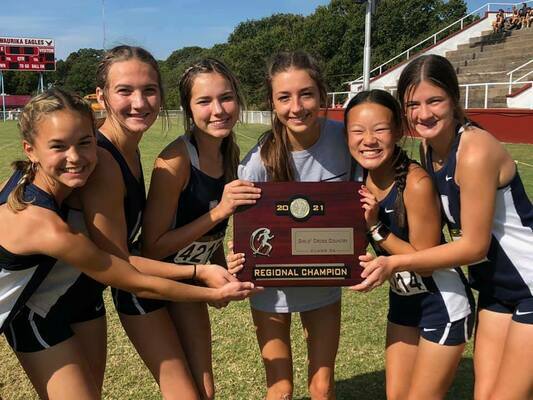 The Outlaw cross country teams continued their march to State on Saturday with dual championships at Regionals in Waurika. Both Head Coach Mikey Eaves and Assistant coach Matt Ivory agreed that teamwork was a motivating factor in the boys and girls teams’ success.

“[They] really showed they are only running for each other,” Eaves said of the girls’ win. “This mentality in any sport can make you or break you as a team and this girls’ team has really bought into the idea that ‘I am running for someone else’ and it’s paying off.”

This is the first Regional championship for the Lady Outlaws since Eaves took the helm in 2009, and the first time both the boys and girls earned the title since 2001.

Both teams will head to Edmond on Saturday for the State meet, with the boys looking for a repeat of the Outlaws’ 2020 State Championship run and a spot on the podium.

“Obviously these guys have the goal to repeat the success they had last year and I know they will give their best effort Saturday at State just like they have all year,” Ivory said.

Ivory pointed out that the regional meet was the first time the varsity boys had competed with a full team.

“We have been struggling all year to get healthy and run a meet at full strength,” Ivory said. “I think we were finally able to do that Saturday.”

The Outlaws placed five boys in the top 15 at Regionals, with Tyler Brown’s time of 18:21.49 putting him in the 5th place spot overall and first among the Outlaws.

“[Brown] really had his game face on,” Ivory said. “You can tell he is on a mission to make the all-state team this year.”

With a time of 18:42.75, Ean Hewitt was 9th overall despite earlier illness and tough workouts through the week.

“[Sloan] ran with focus today and ran for his teammates. When he does that, he transforms our team from a good team to a team that has a chance to achieve its lofty goals,” Ivory said.

“There were some pretty good teams there on Saturday and we will be facing an even tougher task this week at State,” Ivory said.

Korie Kizarr again led the Lady Outlaws with a second-place finish (12:40.83) that earned her All-Regional honors.

“I fully anticipate her to be back to old form this next week,” Eaves said of Kizarr. “She is so talented and is a vital part of who we are this year. Look for an exciting finish to her career on Saturday.”

Also earning All-Regional was Kyah Blundell in 10th place with a time of 13:36.63. Eaves said that Blundell’s performance was indicative of the team culture for the Lady Outlaws.

“[She] really showed a ton of heart in this race. She is proof of what we are all about this year, in running for each other,” Eaves said. “She finished falling across the finish line.”

Skylar Ramsey (13:55.80) finished just outside of the top 15 at Regionals at 18th, and Eaves said she is determined to see the podium at State.

“She has a fight in her that I wish so many others had…[she] has a fire in her for this next week,” Eaves said.

Eaves said that Thompson and Soell, both freshmen, have the potential to influence this weekend’s outcome.

“[They] have so much talent,” Eaves said. “Both girls have a chance to step on the big stage this weekend and make an impact for the Lady Outlaws and I look forward to seeing it happen.”

The State meet is scheduled for Saturday, October 30 at Edmond Santa Fe high school. Class 3A girls will run at noon and boys at 12:45. The community is invited to line Broadway at 8:30am Saturday to send the team off.