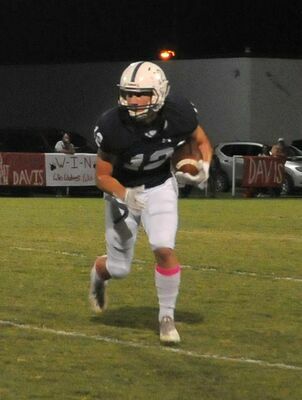 The Marlow Outlaws continued their charge through district play on Friday, extending the record for longest regular-season winning streak in program history to 21 with a 58-19 win over the Marietta Indians. Marlow is now 8-0 on the season and 5-0 in district play heading into a bout with their closest competition for District Championship against Frederick this week.

Head Coach Matt Weber said that the key to the Outlaws’ success is consistent practice.

“Our football team approached last week’s game versus Marietta like mature young men,” Weber said. “We had some of our best practices knowing we have to keep getting better each week.”

As practice continues this week, Weber said that the game this Friday has a lot at stake.

“This week carries a ton of significance: this will be Senior Night, we are playing for a District Championship, and we are playing a very good football team coming in to this game with a ton of momentum.”

Frederick is second in District 2A-4 with a 5-3 season record, 4-1 in district competition after their 46-34 win at home against Lindsay. A win for the Bombers this week would hand them the top spot with only one game left in the regular season.

Weber pointed out that the seniors were instrumental not only in the win over Marietta, but also in getting some game time for backups.

“Our seniors led us and allowed us to start playing backups midway through the second quarter,” Weber said.

One such senior is quarterback/kicker Jace Gilbert, whose kicking game was perfect again including a career-long 52-yard field goal.

“Jace has been 100% on all his field goals this year,” Weber said. “I’m proud he got to attempt a 52-yarder and hope he gets the chance to try a further one. His the other night would have been good from 60 yards.”

Gilbert also completed six passes of seven attempts for 119 yards and three touchdowns, as well as putting up six extra points after touchdowns.

The Outlaws’ early lead paved the way for backup quarterbacks to take some snaps in district play, including freshman Blayd Harris, whose 1/1 passing game resulted in a touchdown. Kagun Mahaffey, a sophomore, threw 4/4 for 32 yards.

The Outlaws came out strong in the first quarter with a 29-yard pass from Gilbert to Will Bergner with 10:19 remaining, followed by an 11-yard run to the end zone by Cole Hayes. Bergner snagged another TD pass, this time for 10 yards, as the clock wound down to 19 seconds left in the first that increased the Outlaws’ lead to 21-0.

Barely over a minute into the second quarter, Gilbert found Bergner again with a 46-yarder.

Gilbert’s phenomenal field goal came with 6:03 left in the half and brought the score to 31 – 0.

Later that quarter, Talon Sullivent took the ball for a 21-yard run to the end zone to close out the half with Marlow up by 38.

Marietta got on the scoreboard midway through the third quarter with a 31-yard run by Alex Rueda; the Indians failed to hit the point-after kick and the score was 38-6. Kicker Carlos Fernandez had another chance at it later that quarter when Jonathan Loymeyer’s pass to Damarron Green for 19 yards resulted in another touchdown for the Indians. The extra-point kick was good to make the score 38-13.

Marlow answered shortly after with Harris’s 20-yard pass to Barron Gage for another touchdown with 2:46 left in the third.

Rueda found the end zone for the Indians again with just under five minutes left in the game; another kick missed the point after to make the score 44-19, Marlow.

Dylan Ruth got a chance for an extra-point try that succeeded after Blayd Harris’s 23-yard run for the Outlaws’ final touchdown with just over a minute left in the game to end it with Marlow 58, Marietta 19.

Kickoff for Friday’s game is scheduled for 7:30 at Outlaw Stadium; seniors and their families will be honored during pre-game.