Outlaws Bring Home Back to Back Cross Country Championship 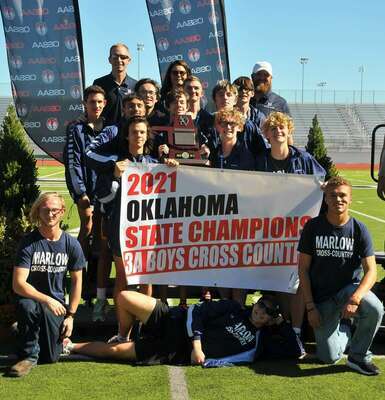 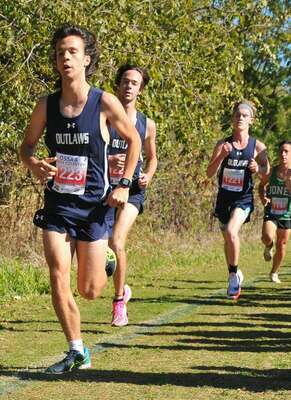 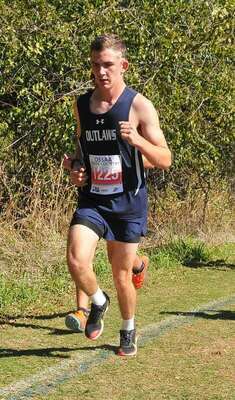 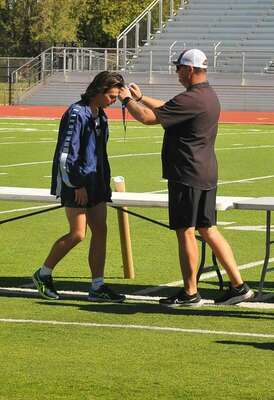 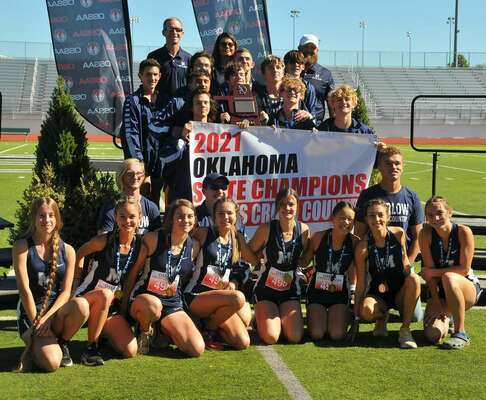 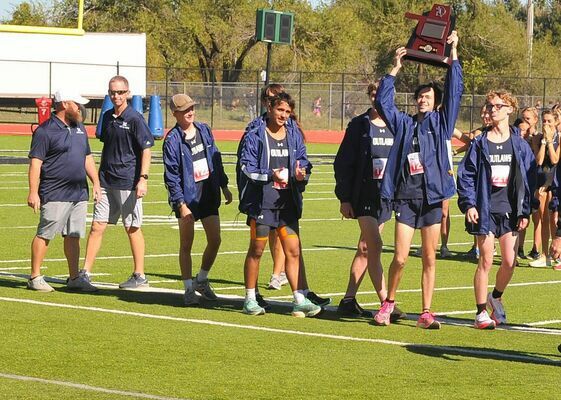 Marlow boys’ cross country went into the season with the goal to repeat last year’s State Championship, and after Saturday’s decisive win at State in Edmond that goal was realized. The Outlaws towered over the 3A meet with an over-thirty-point margin over the closest competitor, Rejoice Christian.

Head Coach Mikey Eaves credits the team culture of “running for each other” that gave the Outlaws an edge this season.

“This group of boys really worked as a team this year,” Eaves said. “I couldn’t be more proud of a group of boys and their willingness to work as hard as they have and do exactly what we have asked of them.”

“Every time you win there is a different story,” Ivory said. “This team was all about running for each other and for the common goal. We were able to win while only having one All-Stater, which is rare, but shows how this cohesive group fought for every point for the entire race.”

Ivory added that the Outlaws faced challenges in the 2021 season, first by graduating 3 of the top 5 runners from the previous team and then by illness and injury, but the group was able to overcome the deficits.

“Being able to repeat as champions is a testament to the state of this program and the determination of these kids,” Ivory said. “We really were only able to run at full strength for three meets. Thankfully those meets came at the end when it counts the most….We had a good idea going in what we needed to do and we laid out a plan that these guys executed perfectly.”

Both coaches emphasized the importance of community support, particularly from Marlow Public Schools.

“We have a great thing going here at Marlow with the support from the entire community including the rest of the coaching staff,” Eaves said. “I looked up in the crowd at the State awards ceremony and seen so many other staff members from almost all our Administration crew to football coaches, wrestling coaches, basketball coaches, baseball coaches and so many community members. If you haven’t experienced a community love for kids like here at Marlow you are really missing out.”

Ivory said that he, Coach Eaves, and Assistant Coach Tammy Miller all understand that hard work coupled with a supportive environment provides the opportunity for success.

“We are thankful for all of the support we receive from the Marlow administration, coaching staff, and this amazing community,” Ivory said.

Junior Ean Hewitt was the sole All-Stater for the Marlow boys, finishing 12th with a time of 17:46.29.

“[Hewitt] ran with courage during the last mile, which allowed him to move up to that position,” Ivory said. “He has been extremely consistent this year and I attribute that to the work he has put in every day since June.”

Tyler Brown and Luke Tolle finished just outside of the All-State pack at 20th and 21st, respectively. Ivory said that Brown, a junior, had a goal of making the All-State podium this year.

“Even when that did not come to fruition, he kept battling to the end for the sake of the team,” Ivory said. “He played a huge role setting the tone for our team during races.”

Ivory said that Tolle had emerged as the leader for the team this season.

“He knows exactly who he is and has led with integrity and never got outworked. I really appreciate the ‘team first’ mentality he instilled,” Ivory said.

Ivory added that seniors Cody Davis and Daniel Aguilar had stepped in to roles left vacant by last year’s graduates.

“[Davis] always knew how to lift the spirits of our team when that was needed,” Ivory said.

“[Aguilar] had never been a part of the varsity team in his career but he made it count this year with his performances.”

Ivory believes the Outlaws will benefit in coming seasons with Junior Caleb Sloan and Sophomore Kade Sullivan, who gained confidence and focus with the varsity squad.

The coach also emphasized the importance of team members who not only work hard throughout the season but contribute to the positive environment. Those team members include seniors Braxton Ramsey, Caleb Baade, and Jaxon Davis; juniors Gage Davoult and Jarrod Herndon; and freshmen Michael Weston, Jackson Salie, Tyler Craft, Canton Clark, Aidan Duke, and Erick Busch.

Eaves said that the coaching staff had a goal not just to bring home another Championship but to make a difference in the student-athletes’ lives.

“That’s what coaching is all about,” Eaves said. “Not winning, but making that lasting impact on the kids we come in contact with. A back to back State Championship is just the icing on the cake.”