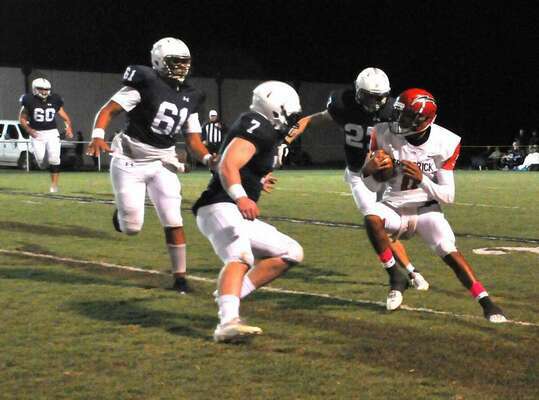 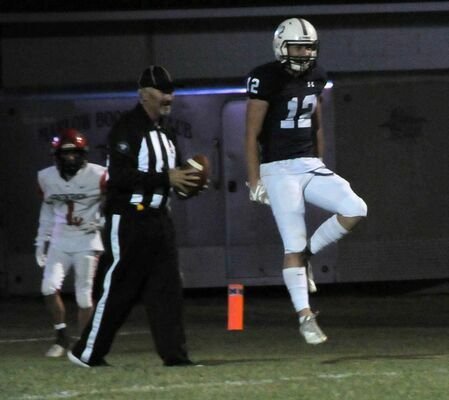 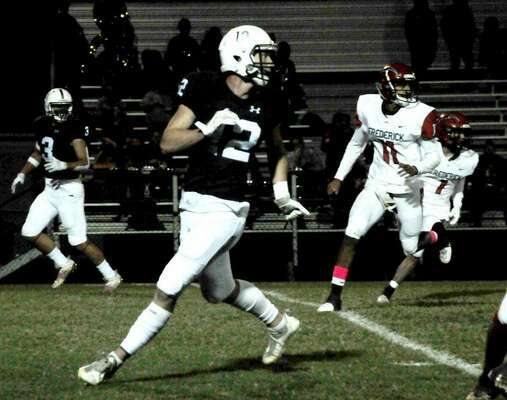 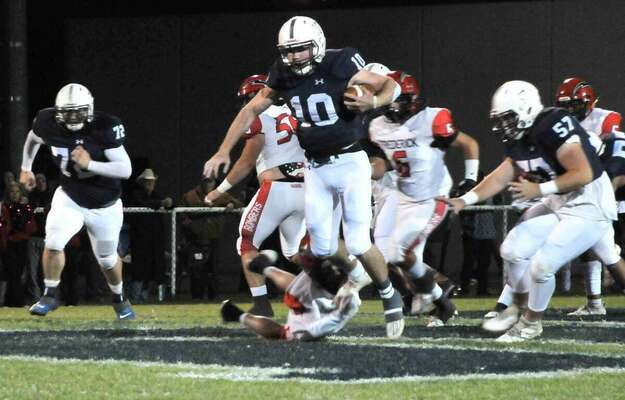 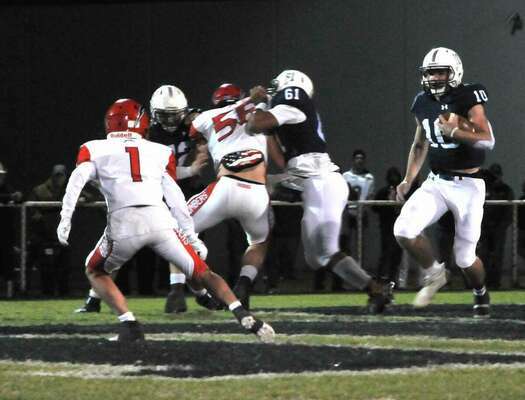 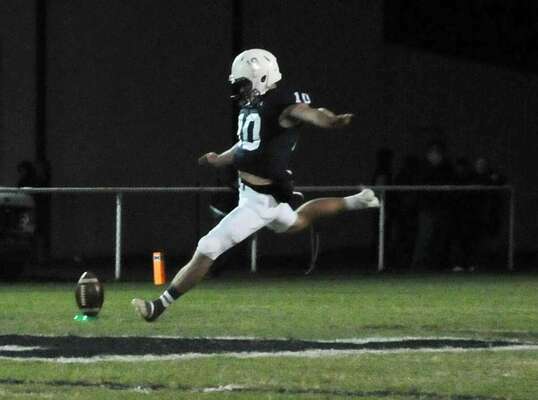 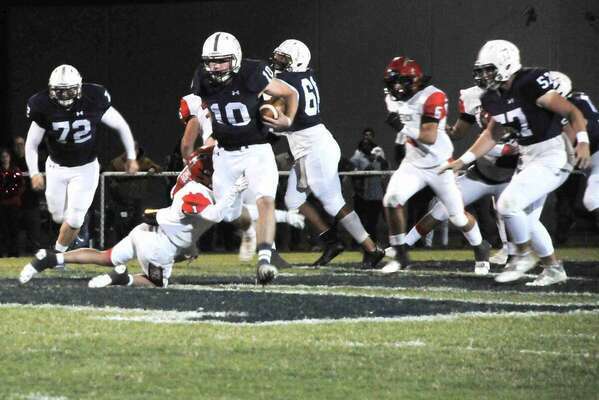 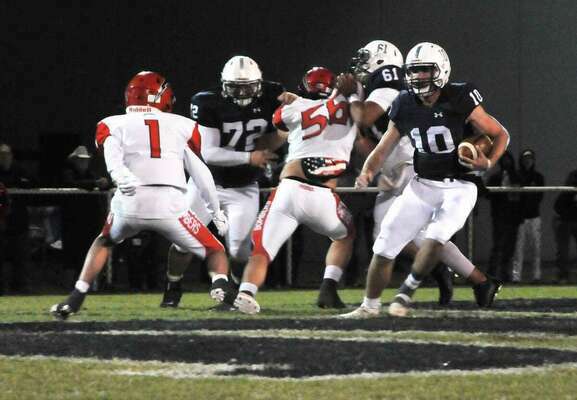 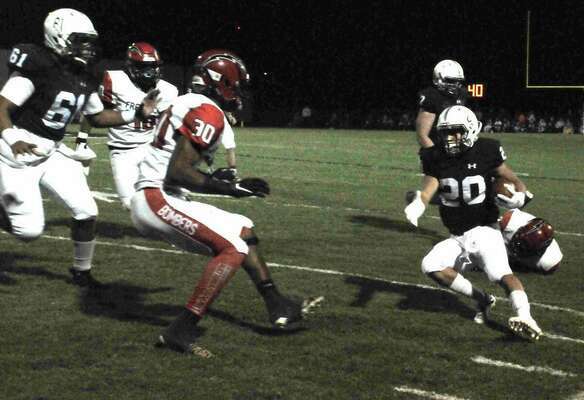 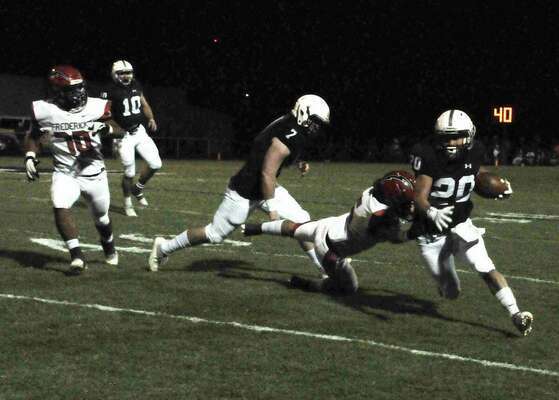 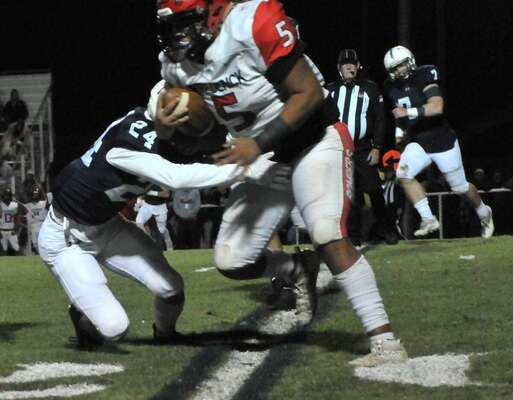 With their win over the Frederick Bombers on Friday, the Marlow Outlaws clinched the District football title for 2A-4 and face just one more game before playoffs begin. The win set a new program record of 17 straight wins in district play.

Head Coach Matt Weber said that the team was prepared for the challenge against Frederick.

“Friday night’s win over Frederick was huge in that it wrapped up the district title,” Weber said. “We played very well against a talented football team.”

Senior leadership was key to the Outlaws’ success, including the return of Julian Marroquin after an injury sidelined the tailback for a handful of games. Jace Gilbert was near-perfect at quarterback and kicker, completing 8 for 8 passes for 167 yards and hitting 6 point-after kick attempts. Cole Hayes continued to get field time, scoring his seventh touchdown of the season, and Adlee Ellsworth took his first trip of the year to the end zone. Will Bergner continued his success on the field with four receptions for 97 yards and two touchdowns.

Marlow’s defense forced three turnovers and had six tackles for a loss of 23 yards for the Bombers. All three turnovers resulted in Marlow touchdowns. The Outlaws kept Frederick to a scant 153 total yards in the game, compared to their own 380 yards.

“Having Julian Marroquin back provided a leadership boost,” Weber said. “We finish up the season with the long trip to Tishomingo.”

“Our team needs to stay focused and play well with another short-term goal of being 10-0,” Weber said. “They have a chance to be the first 10-0 in school history.”

The Outlaws came out big against the Bombers in the first quarter with a four-yard run into the end zone by Gilbert with 7:53 left. Gilbert’s point-after kick made it 7-0.

Gilbert repeated his run a few minutes later and kicked to increase the lead to 14.

The third offensive series for the Outlaws resulted in their third straight touchdown, with Bergner’s 50-yard reception from Avrey Payne with 2:21 left in the first quarter.

The Outlaws continued to dominate in the second quarter; with 7:05 left in the half Gilbert scored his third of the game on an 8-yard carry and point-after to make it 28-0. Next, Bergner took another pass, this time from Gilbert for 29 yards for his second touchdown of the game, his 11th of the season.

Two minutes later, after Brennan Morgan recovered a fumble to give the Outlaws the ball, Adlee Ellsworth scored his first TD of the year as he grabbed Gilbert’s 39-yarder. The extra-point kick was blocked by Frederick, the first time Gilbert’s boot failed to split the uprights after 50 straight this season.

Unfazed, the Outaws got the ball back again with Barron Gage’s interception and scored their third TD in as many minutes with Hayes’s 9-yard run to the end zone. Gilbert’s extra-point kick was good for a 48-0 lead to end the half.

Frederick’s only score came at the third quarter’s end when Cory Keasler took a 6-yard run for six.