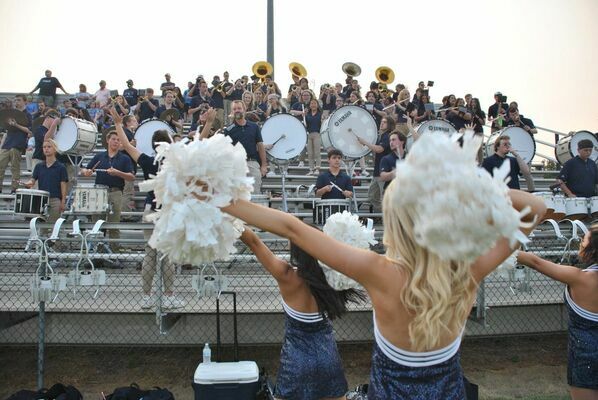 Editor’s Note: This content is part of The Review’s special section commemorating the Outlaws’ historic 2021 season and the Class 2A state championship win. The special section was included with the December 16 edition.

The Marlow High School band took charge in the stands throughout the Outlaws’ historic season, helping create the excitement that made Marlow fans notorious throughout Class 2A.

Director Billy Daniel credited the kids’ hard work and sheer volume that raised the energy level and said that the band had had an impact on the Outlaws’ success.

“The energy level…the kids are just absolutely amped up all the time, especially going into the playoffs,” Daniel said. “They have such excitement. I’ve always strived for a ‘college’ sound and they know how to do it, but it takes massive amount of energy. They pass that along to the crowd and the players.”

Daniel said that level of enthusiasm and volume affected other teams on occasion.

“Every now and then you can mess up the other team,” Daniel said. “We got shut down a couple of times this year, the other coaches complained or the quarterback complained that they couldn’t hear the snap count. That doesn’t hurt when you can cause the other team to false-start, which is part of the environment. You don’t go to a Dallas Cowboys game and it says ‘GET SOFT’ on third down. It says ‘GET LOUD.’ That helps to have a kind of college atmosphere and that level of excitement.”

With students involved in other activities (football, cheerleaders, Bootleggers) at the game, the band had approximately 70 band students in the stands this season.

“That’ll make a racket,” Daniel said. “We do have the largest drumline you’ll see; we have 26 or 27 in the drumline alone.”

Daniel said that not only does the band add to the energy off the field, but the cheerleaders, Bootleggers, and Blue Crew work together to build that atmosphere.

Drum Majors Landry O’Neal and Renee Vermillion agreed that the band was a big part of the excitement at Marlow games this season. They said that they worked with the Blue Crew, Bootleggers, and cheerleaders to coordinate chants and songs, as well as worked to keep the positive energy up in the stands.

Vermillion said that building relationships with other student groups helped the band, Blue Crew, Bootleggers, and cheerleaders work together as a team.

“We all have to communicate, and when it all runs very smooth we can all get together and create that energy,” Vermillion said.

“We work as one group,” O’Neal said. “How much energy can we feed onto the football field and how much can we get that to the boys? That’s the goal.”

O’Neal said that she and Vermillion worked early in the season to make the band a cohesive group.

“We put ourselves into it,” O’Neal said. “We made sure that people felt like they were a part of something great, so they wanted to get along and work harder to get pumped about a game on Friday night. It made a huge difference. Everyone started working together and they started to get excited.”

That excitement built throughout the season to culminate in Saturday’s championship game.

“It’s been absolutely crazy and so fun,” Vermillion said. “Everyone has been centered on this for four months, and it makes me so happy that the football boys have all of this support from the school and our community.”

“The team was great and everyone knew it,” Daniel said. “We all had to be great, too. We didn’t have helmets and pads on but we certainly added to the energy level. The kids are fantastic and hardworking,” Daniel said. “They played until they were exhausted, and then they kept playing…It was a fun season, a great season,” Daniel said. “It’s nice to see the comments from the community that the band made a difference.”