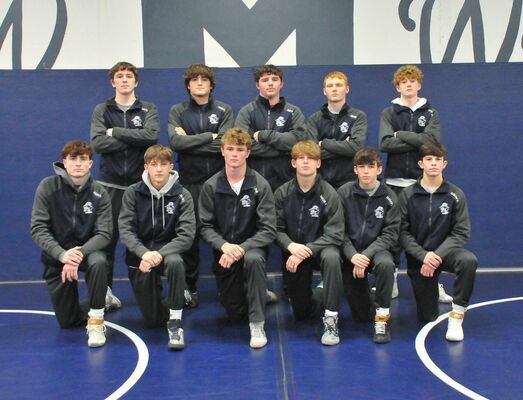 After earning the Regional championship last weekend, eleven Outlaws will battle it out at the Class 3A State Wrestling tournament this weekend, looking for a repeat of 2021’s State Championship/Dual State Championship and their place in Marlow High School wrestling history.

The Oklahoma Secondary Schools Activities Association (OSSAA) also announced on Tuesday that based upon the academic success of all 13 Marlow wrestlers at Regionals, the team had earned a State Academic Championship.

All but two of the Marlow wrestlers qualified for State at the Regional tournament at Plainview last weekend, securing their spots on the mat at the “big house” at the State Fairgrounds Arena.

“I thought we had the chance to get a few more qualified,” Howington said. “I know that’s strange to say when we qualified eleven, but we thought we might have a couple more in there that had a good chance.

“Overall I think we wrestled pretty well in a tough Regional,” Howington added. “We came out on top of it, and that’s great.”

The coach said that although a few of the first-round matchups at State would be tough, he felt confident that the Outlaws were up to the task.

“Everyone who’s going to State is healthy so far,” Howington said.

The 2021 Outlaw wrestlers faced the challenge of wrestling all rounds in one day after the OSSAA made adjustments to the schedules due to COVID-19. This year, the State schedule will be spread over two days, although the threat of inclement weather has again altered the schedule slightly. Howington said that the two-day event was its own challenge because wrestlers will weigh in twice.

“The one-day weigh-in is a lot better for the kids,” Howington said. “But then with a two-day event you might wrestle two rounds the first day and then the next day if you’re not already in the finals where you’ll just wrestle once, you might wrestle two or three times just trying to get through the bracket.”

Howington added that weigh-ins over two days affected the team’s mentality while preparing for the long haul.

“They’ve got to watch their food intake and they don’t want to have to run at night time just to be ready for weigh-in, plus they have to focus on their first matches,” Howington said. “They have to get into the mental state where they can get the job done.”

“Bateman has been stepping up there at 113,” Howington said. “He has a good chance to make the finals if he wrestles hard.

Howington said that Gilbert, Cody Davis, and Wilson all had good chances to make the finals at State as well. He emphasized that every point scored – regardless of whether or not it was a medal round – would be needed to earn another championship ring.

“Some of those guys who can’t make the finals are going to have to come in the back door and place in order for us to win it,” Howington said. “It could be close, but we’ve got a chance to get the points.”

First-round matches begin on Friday at 7pm for all classes; competition will continue beginning at 10:30am on Saturday.