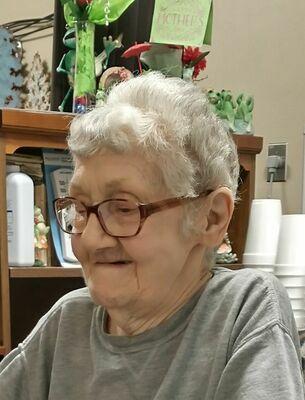 Our beloved mom, Mary Louise Graham, died of natural causes at Grady Memorial Hospital in Chickasha, OK on Thursday, February 17, at the age of 87. She was born in Watonga, OK to Willie Madison “Bill” and Elizabeth (Pendley) Greer and raised in Rush Springs, OK area.

Mary Lou was valedictorian of the Rush Springs High graduating class of 1952. Worked as a secretary at the Grady County Courthouse in Chickasha, OK. She met the love of her life, Hubert William “Bill” Graham, while working at Glass’s Rexall Drugstore in Marlow and four months later in October 1954 they married. They settled in Marlow and raised two children: Mary Letitia “Tisha” and William Mitchell “Mitch”.

In addition to her husband, Mary Lou was preceded in death by her parents and brother: Bobby H. “Bob” Greer. She is survived by her children: Tisha Graham of Norman, OK and Mitch Graham of Marlow, OK, and sister: Sharon Kay (John) Conine of Rush Springs, OK as well as nieces and nephews. Her family will cherish all the memories that were made with her, and she’ll be deeply missed.

No funeral or memorial service is immediately planned. The family will notify loved ones in the future when a service is scheduled.

Mary Lou’s family wishes to extend their gratitude for the care she received from Cottonwood Creek Skilled Nursing and Therapy (Grace Living Center) of Chickasha, OK.