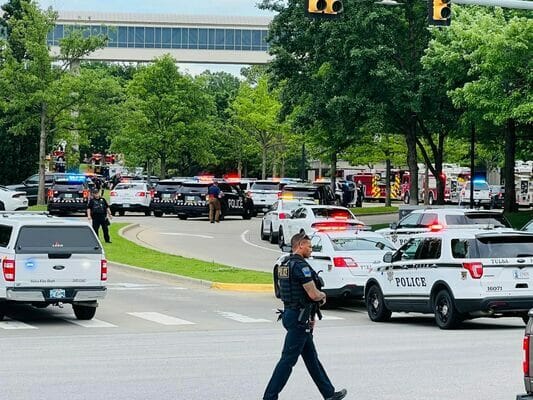 Multiple law enforcement agencies on the scene of a mass shooting event at St. Francis hospital in Tulsa on Wednesday.
Photo courtesy of Tulsa Police Department via Facebook

Five people are dead after an active shooter incident on the second floor of the Natalie Building at St. Francis Hospital on Wednesday. The suspect, Michael Louis, is among the deceased according to reports from the Tulsa Police Department.

Tulsa police Chief Wendell Franklin said that Louis had undergone back surgery performed by Phillips in May and contacted Phillips’ office multiple times in the weeks following surgery, complaining of pain.

According to police, Phillips saw the suspect on Tuesday for treatment and Louis called again on Wednesday complaining of back pain and asking for more help.

Franklin said that Louis bought a semi-automatic handgun from a pawn shop on May 29 and an AR-15-style rifle from a gun store in the Tulsa area the afternoon of the shooting.

Police said that a letter was found on Louis’ person that explained he wanted to kill Phillips and “anyone who got in his way.” Louis blamed Phillips for causing the pain after his back surgery, the chief said.

Franklin said that at 4:52pm on Wednesday, a patient who was on a remote video appointment with a doctor called 911 after the doctor told her there was gunfire in the building. The chief added that the first 911 call came from the hospital at 4:53pm and the police arrived at 4:56pm. A final gunshot was heard at 4:58pm that police believed was the suspect’s self-inflicted gunshot wound.

Several victims were treated for gunshot wounds at nearby hospitals and were later released, according to hospital officials.

Franklin said that authorities received a call thirty minutes after the shooting from a woman who said her husband had killed several people at Phillips’ office. Louis allegedly contacted his wife before or during the shooting, according to police.

“This is yet another act of violence upon an American city,” Franklin said. “We train for instances such as this and I’m overwhelmed and proud of the men and women, all those that responded.”

This is a developing story and will be updated as more information becomes available.