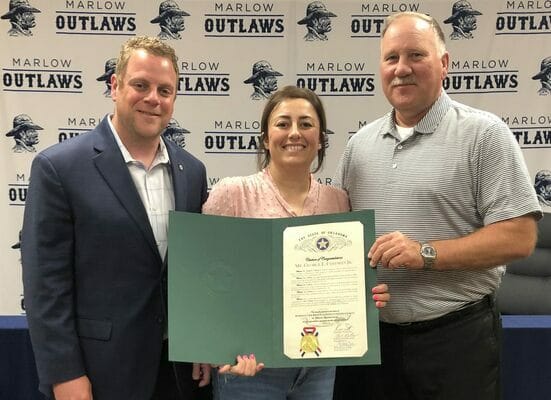 The Citation reads, in part:

“Whereas, Mr. Coffman was named superintendent of Marlow Public Schools in 2002, where he has led the school district for two decades with integrity and selflessness, benefitting the students, staff, and community of Marlow, OK; and

Whereas, Mr. Coffman is known throughout the state as an exemplary leader in public education, resulting in him being selected as Region 15 Superintendent of the Year in 2016 by the Oklahoma Association of School Administrators; and

Whereas, Mr. Coffman has worked diligently with educational professionals, parents, business leaders and other community leaders to create a culture of success for Marlow Public Schools; and

Whereas, this is a most appropriate occasion for the Oklahoma Legislature to express congratulations to Mr. Coffman for his dedication to education, community service, leadership, and ongoing resolve to leave the public education system a better place by belief and deed, and the State of Oklahoma takes great pride in honoring Mr. Coffman on his retirement.”

The Citation was signed by both legislators and Governor Kevin Stitt.

Board member Cody Bannister added his congratulations on behalf of the Board.

“I want to thank you for your work,” Bannister said. “My dad was on the school board for twenty years and I’ve been here for fifteen. All in all, we’ve been about fifty years in the Marlow public school system and I think this is the best-run school system it’s been in those fifty years, and that’s thanks to you.”

Marlow Elementary School Principal Kim Kizarr added her thanks during her Principal report.

“You will be missed,” Kizarr said, addressing Coffman. “I’ve enjoyed working the last twenty years with you and I wish you a blessed retirement.”

Coffman’s last day as Superintendent will be June 10, after which Corey Holland will take over the top administrative spot at Marlow Public Schools.