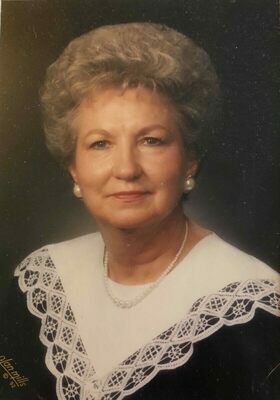 Cora Belle Shipman Coody Montgomery, long-time resident of Marlow, Oklahoma, passed on to heaven on Sunday, June 26, 2022, in Tulsa, Oklahoma, after a full 93 years of life.

Cora Belle was born on December 16, 1928, to Edd and Velma Shipman in Wichita Falls, Texas. She lived in Lawton, Oklahoma, until her parents and brother, Jimmy, moved to the Central High Community, where she graduated from Central High School in 1946. She was very active in planning Central High School reunions for many years. Cora Belle married Everett Coody on February 26, 1948, then focused on being a homemaker and was blessed with the births of their children, Karen Sue and Everett Reed. Cora Belle was active at First Baptist Church and proud of her involvement in the Gamma Phi Sorority during her many years in Marlow. She was also proud of her years at First National Bank in Marlow, serving as an account manager. On October 22, 1988, she married Cecil Montgomery and moved with him to Lutherville, Maryland, a suburb of Baltimore. Upon his retirement, they returned to Marlow. Following Cecil’s passing, Cora Belle moved to Bixby, Oklahoma, to be near her children and grand-children.

Cora Belle was the epitome of a gracious and loving mother and grandmother. She loved cooking, flowers, shopping, Christmas, reading the Bible, peanut butter on saltines, and watching sports, especially Oklahoma Sooners football and girls’ basketball and softball games. Upon learning that she was going to be a grandmother, she announced that she wanted to be a “Mimi”, which became her name for the entire family. She loved her family and will be greatly missed by them. She was preceded in death by her parents, her brother Jimmy, her husband Cecil, her son-in-law Mikel Rogers, and many dear friends. Mimi is survived by her daughter, Karen Rogers of Marlow; her son, Reed and wife Kaylin of Bixby; and sister-in-law, Jan Shipman of Rush Springs. She will be greatly missed by her grandchildren Julie Rogers, Brian Coody (wife Kim), Michelle Long (husband Josh) and Sarah Nelson (husband Ryan). Mimi will also be missed by her great-grandchildren Caitlynn Brown, Braden Coody, Ryan Ashley Coody, Sophie Turner, Cimaura Haney, and Hayden Nelson. She also leaves her nieces and nephew: Jeanette, Julie, Joy, and Jerry.

A celebration of Mimi’s life will be held with a graveside service on 5th day, July, 2022, at 1:00 pm at the Marlow Cemetery, under the direction of Leonard Marker Funeral Home.