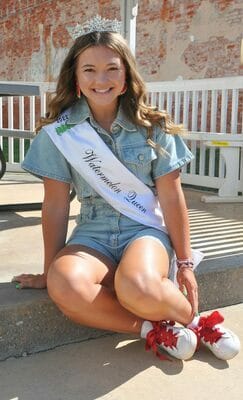 Taylor Abbot, the 2022 Rush Springs Watermelon Queen, takes her job promoting Rush Springs very seriously. The seventeen year old stopped by the Review office to introduce herself and talk about her priorities in the role.

“One of the things I’d like people to know is how special the Watermelon Festival is to our town,” Abbot said. “It’s about how special our town is and for one day, people can come to Rush Springs and experience what it’s like for us. What they see that day, it’s genuinely how it is 24-7 in Rush Springs.”

Abbot emphasized the role that her classmates have in the festival as well.

“They’re kids who are growing watermelons and producing what 40,000 people are coming to see,” Abbot said. “They’re out there working all summer long to prepare for this day, and they’re seventeen. That’s a lot of dedication.”

Abbot was crowned at “Queen Night,” chosen from among four candidates after selling tickets, delivering a speech, and winning a popular vote.

Her speech highlighted what she says is the “magic” of her home town.

“There’s magic that lives in this small town, under the flags of the 4-way, the handshake of a stranger, and a smile of a friend. Every August our small town gets to share this magic with the world. Festival day is a day we celebrate together and truly enjoy the fruits of our labor. It’s a day we get to represent the heart of Rush Springs and the pride of calling this little place home,” Abbot said in her speech.

“Roald Dahl, a British novelist, once said, ‘And above all, watch with glittering eyes the whole world around you because the greatest secrets are always hidden in the most unlikely places. Those who don't believe in magic will never find it.’ I’ve found my magic buried beneath the soil of Rush Springs.”

Abbot’s speech also emphasized the tradition of the Rush Springs Watermelon Festival and what it means to the community.

“Festival day is about tradition…As the world we live in continues to spin faster and faster, tradition has been something lost for many but not for our little town. I’m thankful for the privilege I’ve been given to be a part of the magic that lives here. This is a day we all prepare for, from the moment that one festival ends, until the next one begins. A day you can look into the eyes of an innocent child and see an extra sparkle. I long for this day, to hear the chatter of people, the stories about the miles they’ve traveled just to be here and how our town has become a part of their family traditions. I’m thankful for those who have sacrificed their time and hard work in the fields so that the tradition can live on not only in my generation but in the generations to come.”

Some of Abbot’s duties include visiting other festivals around the state, including Marlow’s Independence Day Celebration.

“It’s fun to meet new people and see what their festivals are like. You get to celebrate other people’s home towns like we do in Rush Springs,” Abbot said.

The Rush Springs Watermelon Festival is held the second Saturday in August.