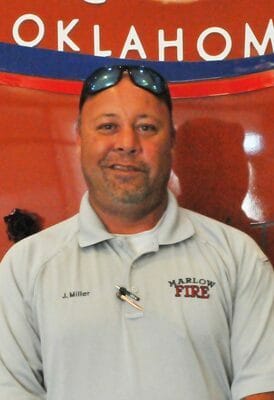 The Marlow City Council on Tuesday heard from Treasurer DB Green regarding the close of Fiscal Year 2022, which ended June 30. In his report, Green said that the General Fund and Marlow Municipal Authority (MMA) finances were “hanging in” to finish out the year.

“On our regular General Fund, we’re pretty much right on a straight line,” Green said. “MMA were a little bit over-collected in regards to our income and a little bit under budget on our expenses, so it’d be hard to come in any closer than we are.”

Green offered praise to those who managed income and expenses in the fiscal year.

“Let’s tip our hats to the department heads and everybody that does this, because managing that much money and coming in like that in these conditions is pretty good,” Green said.

Next on the agenda, the Council considered four items dealing with emergency services for the City of Marlow. Fire Chief Jason Miller was present to add additional information for the items.

First, the Council voted to seek the Oklahoma 911 Management Authority Grant for providing Marlow 911 Dispatch personnel. City Administrator Jason McPherson explained that the City would provide the funds for training and be reimbursed via the grant, if approved. The training would be given to the four dispatch personnel as well as Miller.

“The level of training that’s needed for these folks is pretty intense,” McPherson said. “Since taking over, [Miller] has pushed this so that they can be better-prepared for the calls that come in.”

Miller said that the training would cover telecommunications training as well as emergency medical dispatch.

“I think that’s a key in the world we live in today,” Miller said.

Mayor Jeff Prater said that he felt the medical dispatch training would be a benefit.

“I like the medical side of the training instead of just routine stuff,” Prater said. “Knowing what they’re talking about will be helpful to the community.”

Miller added that the training would be ongoing for additional dispatch employees via a “Train the Trainer” approach to do the training in-house for new dispatchers.

Second, the Council voted to approve Miller to request the Stephens County Commissioners to seek bids for a new 3000-gallon tanker truck to be paid via county tax funds.

McPherson explained that because one of the current trucks was paid for, county funds are available.

“Rescue One got paid off in February,” McPherson said. “That’s opened up the County sales tax for fire departments that we can go buy a new vehicle.”

McPherson estimated that the new vehicle would be delivered next summer after bids are sought and accepted.

The Council also voted to approve purchasing a self-contained breathing apparatus system (SCBA) for the fire department with money from the EMS fund. McPherson said that the SCBA system would replace the current system, which is outdated.

“This kind of brings us into this decade, at least,” McPherson said. “What we have is aging out, and this is good for probably fifteen years.”

In the final agenda item affecting the fire department, the Council approved the Authority Having Jurisdiction Agreement with the Oklahoma State Fire Marshal’s office.

McPherson said that the agreement gave the City of Marlow jurisdiction over fire safety and building codes. He added that the City has a contract with a consulting firm if needed, passing the additional cost to a customer.

Later in the agenda, the Council voted to approve documents pertaining to seeking a Rural Energy for America Program (REAP) grant to update Marlow’s storm siren system. The grant, offered through ASCOG, will be awarded in December if approved.

McPherson explained that although the bucket truck was not budgeted for this year, supply chain issues necessitated beginning the process now.

“What we’re trying to do here is get this process rolling because we don’t know how long it’s going to take,” McPherson said. “Right now bucket trucks are taking almost a year to get built. We’ll make a final payment on the current lease purchase agreement on the 2019 bucket truck in June, so we’re going to try to see how far we can get with this to get it rolling and take care of the timing.”

McPherson said that the cost of the truck will change after quotes are received, which will affect budgeting for the expense.

“By the time we get quotes to the time that they ask us to pay, it’s going to be two different numbers,” McPherson said. “They just say, ‘This is the number right now, but when you get it, the number’s going to be different,’ so we’re trying to prepare for all of that ahead of putting this in the budget even though we’re a year out from getting a truck.”

McPherson said that if the new truck were received, it would replace the oldest bucket truck in the fleet, a 2008 model.

Commissioners Hear from Undersheriff Regarding ...