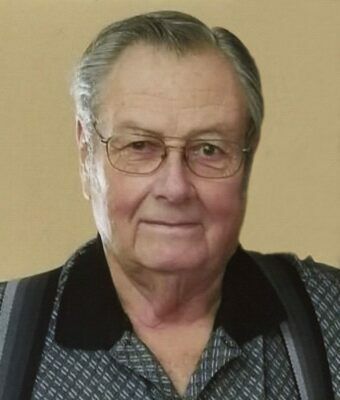 Burial will be in the Westview Cemetery under the direction of Callaway-Smith-Cobb Funeral and Cremation Services in Marlow.

Visitation for Bill will be at Callaway-Smith-Cobb Chapel in Rush Springs on Sunday, August 21,

where he lived until graduating from Rush Springs High School in 1952. After graduation he

attended college at Southwestern Oklahoma State University in Weatherford, where he received

a BS degree in Business Education. Bill was an outstanding baseball player while attending

college. He only lost one game during his collegiate career and also pitched a no-hitter. During

his senior year at SWOSU his team won the Intercollegiate Tournament.

McKinzie. They were married 69 years and lived most of their life in Rush Springs. Together,

they had two sons, Terry and Ronnie, who also graduated from Rush Spring High School. The

boys helped their dad with the cattle on their family farm, and together the family enjoyed

enjoyed going to Colorado in the summer and working at Fun Valley in South Fork, Colorado,

and spending the spring and fall fishing at Lake Sardis in southeastern Oklahoma.

Bill was offered a professional baseball contract after college, but instead chose to teach and

coach high school basketball, softball, and baseball. He had teaching and coaching stints at

Pioneer, Pocasset, Ninnekah, and Rush Springs. In January of 2016, Bill was inducted into the

Grady County Coaches Hall of Fame. This award obviously was an honor, but in no way

competed with the feeling he got, when after twenty years, a student and player told him how

much they appreciated his help in building their confidence and character. Bill had 30 years of

teaching, all in Grady County.

After retiring in 1986, Bill enjoyed having more time to raise cattle, work a few odd jobs, and

spending time doing what he loved most- traveling, camping, and his passion, fishing. He also

enjoyed weekly domino games with his friends in Rush Springs. Bill had the uncanny ability to

talk to anyone and everyone with wit and humor, and made friends wherever he went. He was a

member of the Vimy Ridge Baptist Church in Rush Springs.

Bill was preceded in death by his son, Terry; daughter-in-law, Darlene Dryden; his father and

He is survived by his wife, Jo Ann, of the home; son, Ronnie Dryden of Rush Springs, OK; a

AR. He is also survived by his niece, Darlene McCullock and her husband Larry of Norman,

OK; a nephew, Jack Green and his wife Jacqueline of Lawton, OK; and many other nieces,