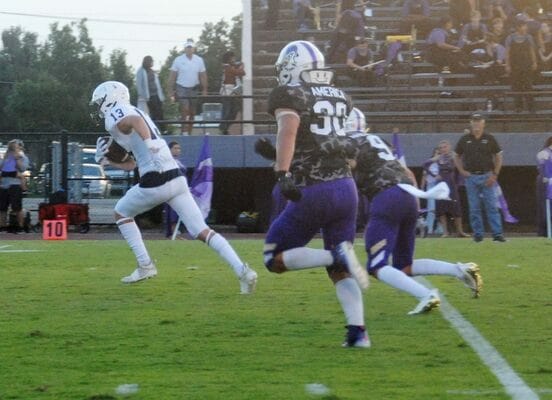 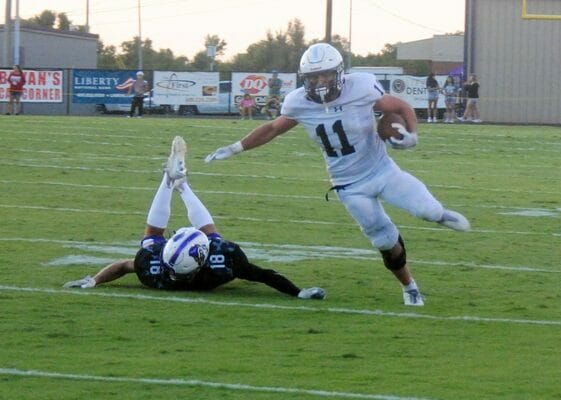 [Published in The Marlow Review September 8, 2022]

Marlow football increased more than one winning streak in their first game of the season Friday as they beat Chickasha, 45-14. Their 16-game win record is the longest in program history and the second-longest in the state, behind Bixby. This is also the 24th straight win in regular season games and the seventh win on the road.

The Outlaws racked up 451 total yards in the game, more than any single game during the 2021 State Championship run.

Head coach Matt Weber said he was pleased about the win and ready to make improvements during this week’s practice before facing cross-county rival Comanche on Friday.

“I’m happy for our kids and we will never take winning for granted,” Weber said. “Our kids are smart enough to know that we will see plenty of mistakes when we turn on the film. We plan on trying to correct as many as we can and be a better football team against Comanche.”

The Outlaws came out strong in the first quarter, scoring twice in five minutes. The first, with 8:13 left in the period, was on a 4-yard run by Lane Jones and a point-after kick by Clayton Robinson. The Chicks answered a few minutes later with Ma’Lek Murphy’s run to the end zone and an extra point from Hunter Raasch to tie the score.

Marlow’s quarterback Cade Gilbert found Avrey Payne on their next possession with a 53-yard pass with 4:42 left; the point-after kick was the first of two to be blocked in the game.

The Outlaws scored four times unanswered in the second quarter to make six total TDs in the first half.

Gilbert first found Barron Gage with a 38-yard pass at the 8:30 mark in the second; another blocked kick kept the score 19-7.

Brian Zhang then took a 7-yard run to the end zone less than a minute later. The Outlaws attempted a two-point conversion but the pass failed to connect.

Gage grabbed another pass from Gilbert late in the second quarter, this time for 12 yards with 1:14 remaining in the half. A scant minute after the conversion attempt failed, Gilbert found Gage again with a 33-yarder as the clock wound down. Gilbert’s point-after kick was successful and the Outlaws went to the locker room up 38-7 over the Chicks.

Murphy got the second of Chickasha’s touchdowns midway through the third quarter, this time with a 54-yard run past the Marlow defense. Raasch’s point-after kick made it an even 14 for the Chicks, but it would be the last time they scored.

Marlow’s final score came early in the fourth as Gilbert carried the ball to the end zone and kicked the extra point to bring the Outlaws up 45-14.

Gilbert had 342 total yards in the game, with 230 passing and 112 rushing. The junior completed 13 of 15 attempts, threw for four touchdowns and only one interception and had one rushing TD.

Chickasha’s quarterback Cade Rayburn threw two interceptions, both snagged by Payne. The Chicks had only 246 total yards to Marlow’s 451.

Looking at this week’s matchup, Marlow has won 8 in a row against Comanche, including last year’s 36-0 victory. The Indians remain in Class 2A, where they are 1-0 in District 3 so far. Washington, who caused Comanche to drop out of the playoffs last season and ultimately fell to Marlow for the State 2A Championship, is the only team in the district with a better record (2-0) due to Zero Week play.