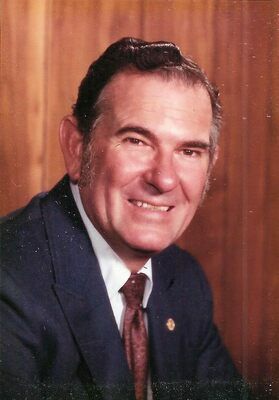 Earl graduated in 1951 from Capitol Hill High School in Oklahoma City. During his high school years, he was an avid baseball player and he played the saxophone. While he was in high school, he and his father started OK Rubber Welders Tire Service which he worked at until he was a young man. He later sold the tire company and went to work for Halliburton which took him to Farmington, NM in the early 60’s. After he separated from Halliburton he worked in a few different fields until he decided to start an oilfield compressor fabrication company, Specialty Services, in the mid 60’s. During this time, he became a Mason. He then became a 32nd Degree Scottish Rite Mason and then became a Shriner. He was a Shriner for over 50 years. He sold Specialty Services in the mid 70’s and decided to open an oil field service company and a pawn shop which was something he really enjoyed because of all the people he met and he loved to wheel and deal. It was during this time that he met and married his loving wife, Kaye Broyles Thompson, on December 31, 1990 in Farmington, NM. In 1994 they moved to Foster, OK where they built and operated Foster General Store. They sold the store and retired in 2019 and moved to Marlow.

Earl was preceded in death by his parents, “Bill” and “Faye” Starkey; an infant brother, Billy Joe Starkey; and two sisters, Amenia McElreath and Leota Gore.

A Celebration of Life is planned for Friday, September 16, 2022 at 11:00 AM at Whitt Funeral Home in Duncan, with Pastor Rocky Keck officiating. A live stream of his service will be available on his obituary at www.whittfh.com. Arrangements have been entrusted to Whitt Funeral Home/Oakcrest Cremation Center.

The family requests that in lieu of flowers please make a donation in Earl’s name to the Shriner’s Hospital, online at shrinerschildrens.org or by calling 800-237-5055.