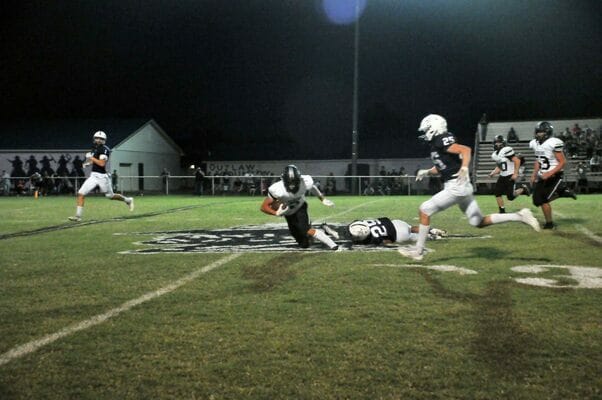 The Outlaws’ Brian Zhang (#29) chases down the Demons’ Cutter Greene (#5) in the second quarter of Friday’s matchup between Marlow and Perkins-Tryon. Photo by Elizabeth Pitts-Hibbard/The Marlow Review 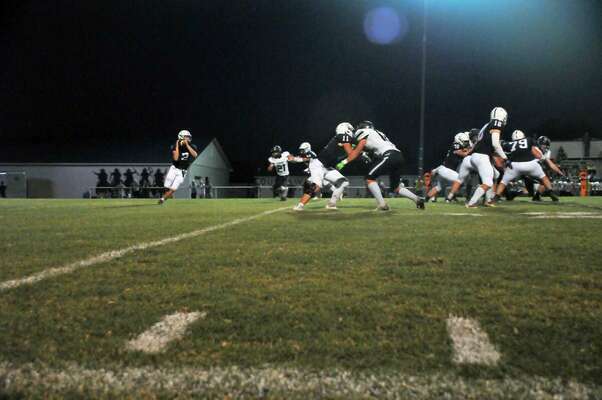 Cade Gilbert (#2) goes back to pass in Friday’s game against Perkins-Tryon. The junior quarterback threw for 166 yards in the bout. Photo by Elizabeth Pitts-Hibbard/The Marlow Review 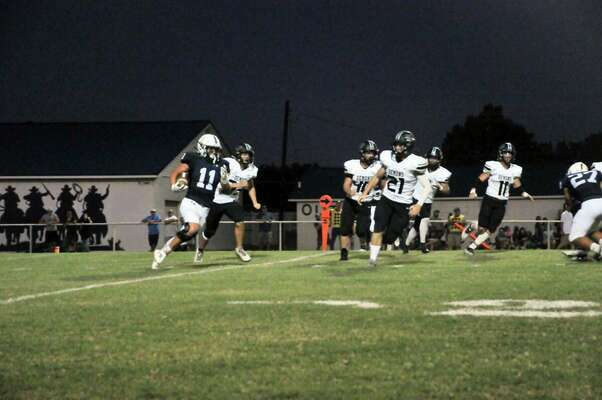 Lane Jones (#11) hustles for the Outlaws on Friday against Perkins-Tryon. Photo by Elizabeth Pitts-Hibbard/The Marlow Review
Previous Next

The Marlow Outlaws’ 17-game winning streak was broken on Friday with their loss to Perkins-Tryon, 34-21. This was the first-ever meeting between the Outlaws and Demons.

“We simply were beaten by the better team,” said head coach Matt Weber after the loss, which also marked his 100th game with the program. “Perkins won the line of scrimmage on both sides of the ball and that is where football games are won.”

Perkins-Tryon came out strong, scoring on an 80-yard kickoff return and again on a 5-yard run later in the first quarter. Marlow was unable to answer until the second quarter, when Avrey Payne scored the first of his two touchdowns on passes from Cade Gilbert, this time for 27 yards.

Perkins edged the score up again by six when Braxton Lightfoot took a 14-yard run; the point-after kick failed, keeping the score to 20-7.

The Outlaws came out of the locker room ready to go after halftime, scoring again when Gilbert made a 54-yard run to the end zone just two minutes into the third quarter. With seven minutes left to go in the third, Marlow took the lead, 21-20 after Gilbert’s 42-yard pass to Payne connected again.

Marlow kept the lead for four minutes until Lightfoot found the end zone on a seven-yard run; the two-point conversion attempt failed, leaving Perkins only up by five going into the final quarter.

The Demons scored again early in the fourth and this time the conversion attempt – a pass from quarterback Tanner Dawes to Luke Cazelle, was successful. With 10:58 remaining, the Outlaws would need two touchdowns to win, but the clock was not on their side.

“I’m proud that our kids never gave up and overcame a two-touchdown deficit in the second half,” Weber said. “We have watched the film and our guys are committed to correcting those mistakes.”

“Pauls Valley is easily one of the top teams in our district, and they return so many kids with Friday night experience,” Weber said. “No doubt we will have to be better on the line of scrimmage and be at our very best.”