Outlaws Tied for Tops in District Going into Week 2 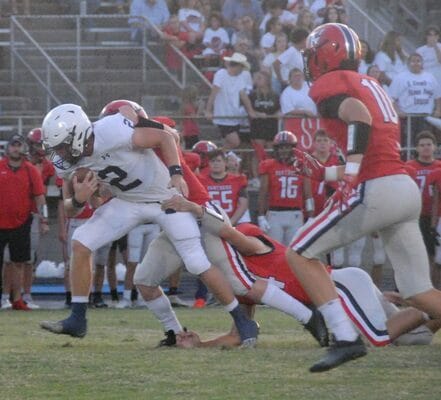 Marlow quarterback Cade Gilbert powers through the Pauls Valley defense during the Outlaws’ 29-14 win over the Panthers. 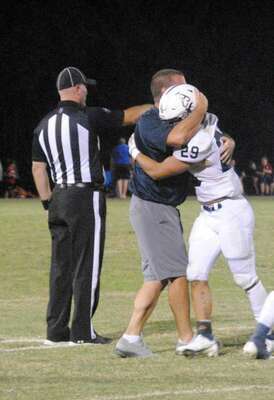 The top 3 football teams in District 3A-2 are tied at 1-0 after the first week of district play, with the Marlow Outlaws alongside Heritage Hall and Plainview. All three are 3-1 on the season with losses to Perkins-Tryon, Clinton, and Newcastle, respectively.

The Outlaws enter Week 2 of district competition after a 29-14 win over Pauls Valley last week.

“It was great to start off district games with a win versus a quality opponent,” said head coach Matt Weber. “Each win in this district is huge because we have several playoff-caliber football teams that won’t make the postseason.”

Weber said that earning the maximum District points (15) was a benefit going forward in district play and could made a difference in a playoff bid for the Outlaws.

“Playoffs could very well be decided by that,” Weber said.

The Pauls Valley Panthers got on the scoreboard first on Friday with a 25-yard run by Justin Humphrey and a successful point-after kick by Juan Pablo Amaya to make it 7-0 with 7:36 left in the first quarter.

The two traded possession throughout the second quarter until, with just 21 seconds left in the half, Easton Dittner grabbed a 36-yard pass from Outlaw quarterback Cade Gilbert with a kick by Gilbert to tie before heading to the locker room for the half.

Marlow scored again late in the third on an 8-yard run by Lane Jones. Gilbert again kicked the extra point to give the Outlaws a 14-7 lead over the Panthers.

Pauls Valley came back early in the fourth quarter to tie the game again, this time with a 6-yard pass reception by Dakota Weatherford and another good kick from Amaya.

The Panthers lost ground again just over two minutes later when Brian Zhang took a 23-yard dash to the end zone to give Marlow another touchdown lead. The Outlaws increased the lead again with less than two minutes left when Gilbert took the ball across the goal line and gave Marlow a near-insurmountable advantage with a successful two-point conversion pass to Barron Gage to make it 29-14.

The Panthers’ offense made a valiant attempt at a comeback until with just a handful of time on the clock, Humphrey threw a wild pass that landed solidly in Zhang’s hands. The interception sealed possession for the Outlaws to end the game.

Weber said that the Outlaws are not resting on their laurels after the win; they’re preparing to host Lone Grove this week. The Longhorns are also 3-1 for the season but lost their first district game to Heritage Hall on September 23.

“Lone Grove is a very talented football team and is certainly a team in the district that will be fighting for a playoff spot,” Weber said. “We will have to improve in many areas and put a better product on the field to have a chance.”

Playing back at their own stomping grounds will give the Outlaws a much-needed advantage as well.

“It will be nice to be at home again, as only two of our first six games are at Outlaw Stadium,” Weber said.

Playoffs over for Outlaws this season