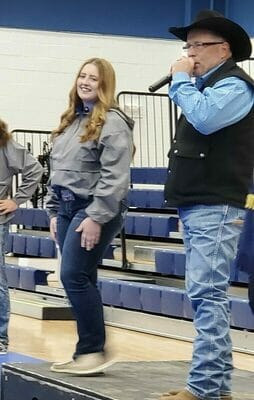 Central High FFA senior, Carson Baker, smiles as the bidding war increases at the annual labor auction, with auctioneer Todd Robertson keeping the momentum going. CH’s labor auction fundraiser was held Thursday, Nov. 3, 2022, at the CH gymnasium. Baker brought in $3,700 for her chapter. She also earned a pie in the face for her efforts. The fundraiser generated more than $41,000. There are around 80 students in the FFA program. Photos submitted by Carson Baker. 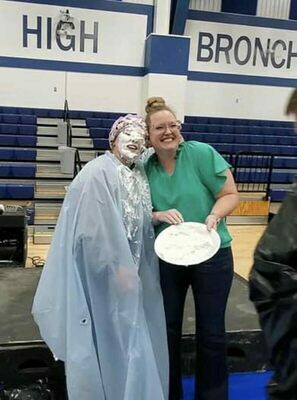 Bonnie Gatewood had the honors of smashing a plain whipped cream pie into Central High FFA officer, Carson Baker's face at the FFA labor auction and dinner, Thursday, Nov. 3, 2022. Gatewood is a mentor, family friend and one of Baker’s cheer coaches. Photos Submitted by Carson Baker.
Previous Next

Central High FFA most likely broke its own record, with more than $41,000 raised at its annual labor auction sale and dinner Thursday night. They wasted no time in sharing that “unheard of” news on their chapter’s FFA page.

“It’s the chapter’s oldest tradition. It was a great night,” said FFA instructor, Derek Mitchell. “We had 77 members, including the officer team and myself. The students are all 8th to 12th grade.”

Each member will complete eight hours of labor for the person or company who won the bid on them. Additionally, two handmade, donated quilts, several T-shirts and quite a few baked goods were auctioned. One quilt was donated by Holly McElhaney, who also donated one to Elgin FFA, because she has students who attend that school; and another by Merna Mitchell, who owns CB Consulting.

Highest bid was earned by senior FFA team member and officer, Carson Baker. She holds the Sentinel position in her FFA chapter. Mitchell said that was for $3,700.

“She’s really involved in the chapter,” he said. The moment was an emotional one for Baker, she said. “I started crying.” That’s because the company that won the bid, Five Star Solutions, is actually owned by her grandparents, Burt and Shirley Derryberry.

“I expected them to bid, but not that much. My parents and grandparents have always been so supportive of me. This means so much to me. I started showing pigs at the age of 2,” Baker said. She is the daughter of Raney and Kelly Baker of Central High. She also earned a plain whipped cream pie in her face, served up by Bonnie Gatewood, who happens to be her cheer coach, mentor and family friend.

Mitchell said Baker has been a member of the FFA team for five years, has participated in livestock judging, earned a Grand Champion heifer at the Stephens County Free Fair, is a cheerleader, and is concurrently enrolled. She is also really involved in the school’s FCCLA chapter.

Baker, 18, said she started showing cattle in sixth grade. While she is undecided on a college, though she’s been submitting applications, she has a close friend who attended Oklahoma State University. She knows it has a strong agriculture business program. She wants to teach children and do traveling social work through other countries, but at the same time, she wants to also apply her FFA experience throughout her adult life.

Attending National FFA conventions has provided her with some of the most memorable moments. Central High recently returned from the convention in Indianapolis.

“We make multiple stops to see so many places,” she said. “At convention, you see people chasing their dreams. I love listening to the speakers and meeting people and it fully changes the way you see FFA and what the world has to offer.” She knows that the lessons she learns now from FFA will stay with her for a lifetime.

Mitchell said that the annual event also benefited another local organization. “We hired the Central High Elementary Athletic Association to cater the meal. A lot of those are FFA alumni, so we keep a lot of money right here in our community.”