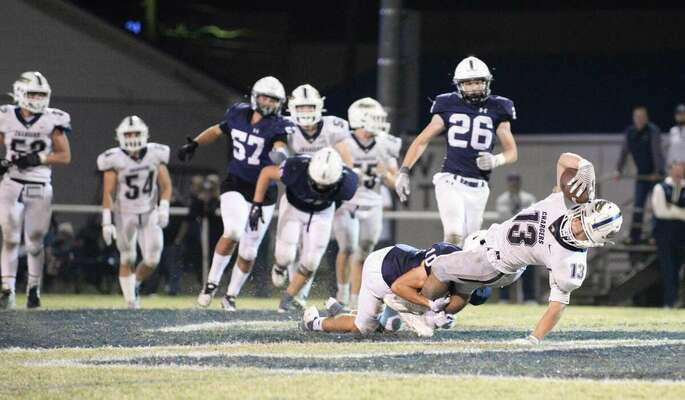 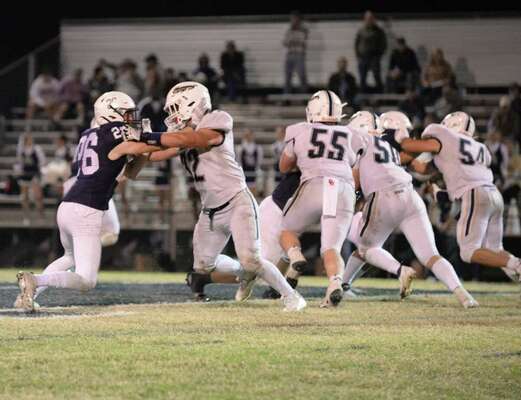 During the first half, Marlow’s Ely Gray #26, takes on one of Heritage Hall’s players during a tough battle at Outlaw Stadium, Thursday, Nov. 3, 2022. Photo by Toni Hopper/The Marlow Review
Previous Next

While Marlow didn’t win the senior night game against Heritage Hall last week on Thursday, they do have a new record to look forward to as they open playoffs against Perkins.

“We would have liked to have gotten the win on senior night for our 11 seniors. Heritage Hall is easily one of the top teams in our class,” said MHS Head Coach Matt Weber. “Our defense played well enough to win the football game, but our offense was not able to move the ball or put points on the board. It resulted in our defense being on the field for the majority of the game. I’m very proud of our football team for qualifying out of the toughest district in the state. Going into week 9, nothing was determined.”

Weber has qualified for the playoffs in every year as a head coach, which is 19, per Jason McPherson’s records.

“We truly have a new season beginning Friday with only 16 teams remaining in the class,” Weber said this week. “Obviously, Perkins has an outstanding football team as seen earlier in the year. Keys to victory are being able to move the football with consistency and playing better run defense than we did the first game against them. This late in the season, both teams are quite a bit different compared to week 3. Our team is excited to go compete on Friday.”

Perkins finished its regular season 8-2 and second in Class 3A-1. They defeated the Outlaws, 34-21, at Marlow on Sept. 16. Friday’s battle will be the second meeting all-time between Marlow and Perkins.

It’s also only the second time for the Outlaws to meet on the field with Perkins.

In the last game, which was moved to Thursday, Nov. 3 because of a severe weather threat for Friday, the Outlaws had the least amount in offensive yards at 142, against an opponent in this season. Heritage Hall is also now at 56-0 versus district opponents under head coach Brett Bogert.