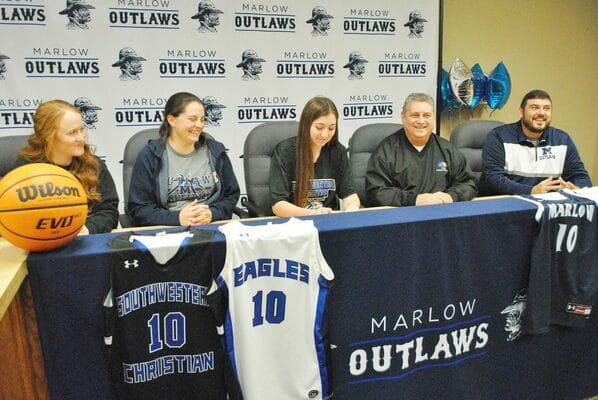 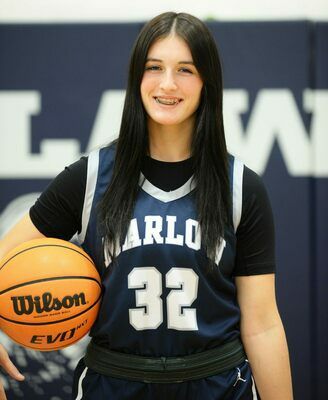 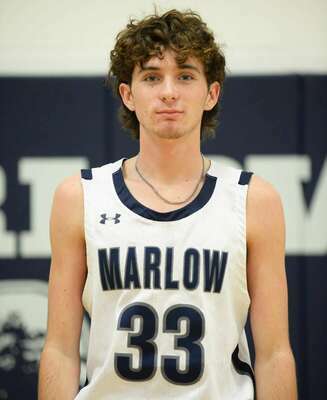 Parker Boyles is this week's Outlaw Players Spotlight for the boy's team, and joins fellow teammates Avery Payne, and Kaden Harris in the circle. Photo by Toni Hopper/The Marlow Review 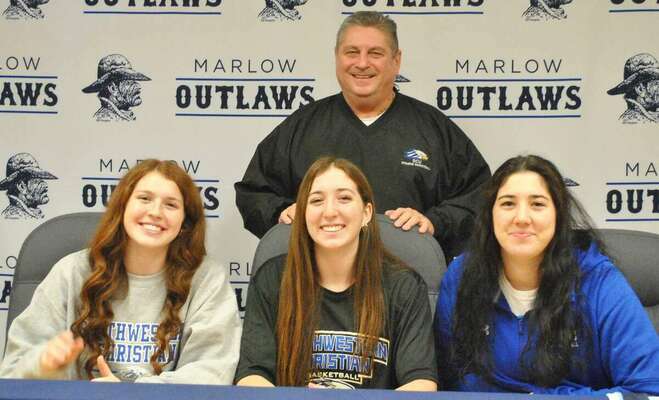 Whitney Wade and her sisters, Jenna and Lauren, gather for a photo with SCU Head Coach Mark Arthur. Both Jenna and Lauren are members of the SCU-WBB team, and next year, it will be Whitney and Jenna, with Lauren exiting upon graduation. Photo by Toni Hopper/The Marlow Review
Previous Next

MARLOW SCHOOLS PSA: The hardwood floors in the new and dome gyms will be refinished during Christmas Break. Both facilities will be closed from Thursday, Dec. 22 to Tuesday, Dec. 27. Athletes, students and the general public are asked to not enter either gym during this time.

The Lady Outlaws and Outlaws basketball teams have stayed busy with practices this week, maintaining that winning attitude they’ve shown since the season began. The Christmas Tournament in Idabel is Dec. 27-29, another reason for their hard work this week. They will break Thursday for the holiday. Lady Outlaws are 4-0, and 12th (up by 1 slot) in the OSSAA rankings with 354 points. The boys team moved up from the 16th slot to 14th position this week, and are 3-1 currently, with 298 points.

“I am incredibly proud of the commitment and hard work of everyone on the team. We are off to a great start,” Tahah said of her Lady Outlaws. Recap: 39-37 win against Pauls Valley, 50-38 in the homecoming game against Lexington and 42-28 Lindsay.

After the boys’ team narrowly lost to Lindsay, 42-40, Dec. 6, they were determined to win against Bridge Creek the following week. And they did, 55-48.

“This was a great game for us to end the semester break,” Harris said. “It was a very competitive contest throughout the game.”