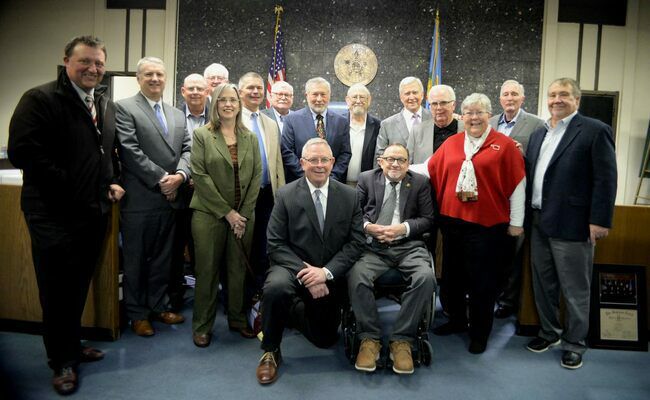 More than 200 individuals gathered in the Stephens County District Courtroom for Judge Ken J. Graham’s retirement celebration, Dec. 20. Graham was elected District Judge for the Fifth Judicial District on Nov. 4, 2014. The event was filled with stories by fellow judges and attorneys.

Carl Buckholts, President of the Stephens County Bar Association, pointed out that during Graham’s first term in office he presided over two cases that drew national and world attention. The Allen Hruby and Christopher Lane trials

were two of the most notable murder trials at that time in Oklahoma.

Chief Justice of the Supreme Court Richard Darby and Supreme Court Justice James Winchester honored Judge Graham with their attendance. Each Justice expressed their respect for Judge Graham’s career as an attorney and as a

After all the story telling was shared, Judge Graham thanked his wife, DeDe, for her love and support, and said his greatest accomplishments are his family. He is the father of Dr. Demetra Graham Cox.