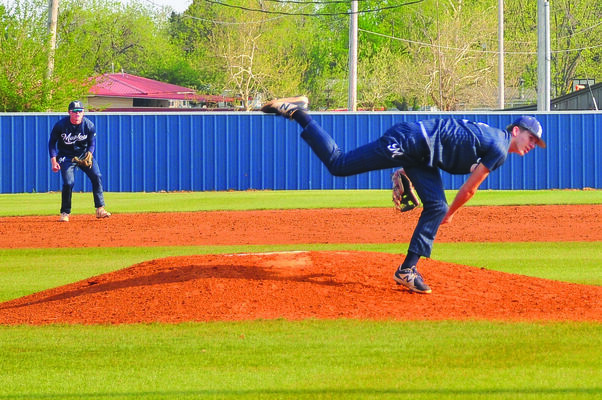 Avrey Payne pitches in the game against Pauls Valley, with the Outlaws at the top of the Clas 4A District 3 baseball standings. April 2022 File Photo/The Marlow Review 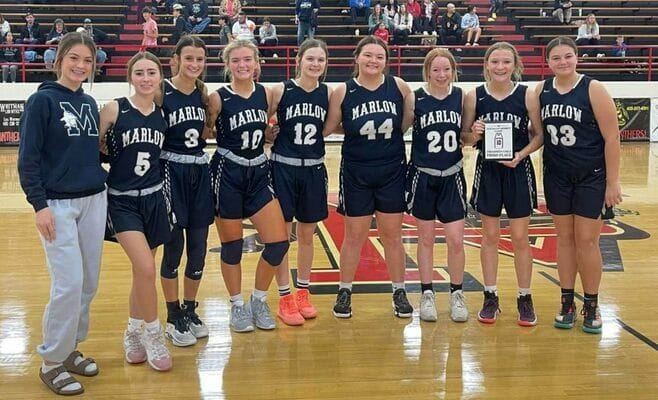 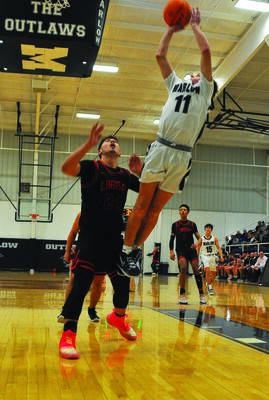 Editor’s Note: This is our Year-in-Review for 2022, area sports, part one. Part two, for June through December, will be published in next week’s printed edition. We hope you enjoy this look back at some of the highlights of our young athletes and teams for Marlow, Bray-Doyle and Central High. Each week through January, we will feature a Year-in-Review article highlighting the news of the year. We will also take a look at community news, education and crime.

The 91st annual Stephens County Basketball Tournament, to be played at Velma-Alma High School, was moved to Central High gym because of concerns over staffing/COVID-19. Tournament hosting rotates yearly. Central High was scheduled to host the 2023 tournament, but it was a swap, which means V-A will host the 92nd tournament this year. As the 2022 tournament got underway, there were a few bumps, including the Waurika boys’ team not able to assemble for the first round game against Marlow, but they were expected to continue in the consolation bracket near the end of the week. Defending tournament champion Marlow Lady Outlaws advanced first with a 65-27 win over Wayne. Whitney Wade was the leader in scoring for her team with 18 points; and Kently Davis scored 10 points.

Marlow Outlaw wrestlers earned the Class 3A District 2 Champion title after hosting the Dual competition and seven other teams. In late January, they scored 603.5 points at the Paul Post tournament in Sallisaw, earning a 1st place win.

In February, headlines proclaimed that the Wrestlers were headed to Dual State; and so were the MHS Swim Team members in their field. Outlaw wrestlers brought home back-to-back championships, defeating Jay 45-31, and securing a fourth state championship title for Marlow’s athletic departments during the school year (2021-22). Marlow’s Bootleggers earned a State Championship title and was honored during a home game, Feb. 11. And, 11 Outlaws were state bound after a regional tournament – with the State 3A qualifiers being Case Rich, Gehrig Furr, Ty Scott, Caden Gilbert, Keller Kizarr, Brantz Bateman, Cody Davis, Dason Davis, Kyle Wilson, Zach Dawson and Lawson Knox. Outlaw Wrestlers continued a winning streak in March, with another state tournament title.

Central High hosted the Class A District 8 tournament, and in baseball, the Bronchos were 6-7 for the season after a 44-67 loss to Ft. Cobb.

In March, the boys’ basketball headed to Class 3A for state tournament. It was 28 years (1994/95) when Marlow made a back-to-back appearance at state level. The Outlaws were 21-3 for the season. Lady Outlaws ended their season against Kingston 35-37.

The Outlaws ended its 2021-22 season with a 22-4 record, after losing to Millwood, 44-42 in the semi-finals of the Class 3A State Tournament. They beat the Roland Runnin’ Rangers 52-43 at the State Fair Arena earlier in the week.

Letters of Intent for Outlaws included February: Julian Marroquin for football at East Central University; Kyle Wilson and Will Bergner, with Northeastern State University; and in March: Kristany Travis signed with Murray State College for the rodeo team.

Spring in late March and a late winter storm put a damper on baseball schedules for area teams, with rains making fields a muddy mess. It still didn’t slow Marlow down as they traveled to Texas to play three games during spring break. They started with wins, 13-0 and 11-0 over Dickson. They lost two games in Port Aransas, and won a Friday home game against Purcell, 13-1. The games against Madill were delayed because of rain, then the double-header was a score, 11-1 and 17-1 for the Outlaws.

Central High Bronchos, Class A, began its season with a 1-3 after a 19-13 win over Empire early in the month. A lost to 2A Wynnewood on March 3, 0-13, and then lost 6-7 in their play against Cyril. They also hosted the Red Dirt Classic in late March.

Bray-Doyle Donkeys were 0-6, with regular-season openers canceled. The Donkeys hosted the Joe Lumbert Memorial Festival in early March, but fell to Cement 1-12, and to Geronimo 2-22, and no points in the game against Velma-Alma (ranked #17 in Class A).

Lady Outlaws Golf team were champions of the Marlow Invitational on March 21. Gabby Hack to ok the overall top spot, and seven teammates were in the top 15.

Four Central High Lady Bronchos hit five homers to a 23-11 win over Geronimo and giving them a 6-4 in the season as March came to an end.

Vaulting into April, Kennedy Kizarr tied the Marlow school record of 11 feet for the Girls’ Pole Vault at the Elgin track meet.

Back on the baseball field, Marlow won 5-0, retaining its top spot in District 3A-4. The varsity team was 15-3 in the season after finishing as runners-up in its home tournament. They still were 7-0 in district play and top-ranked in Class 4A District 3.

The Harlem Wizards came to Outlaw Country thanks to the PTO fundraiser. The game against the “Blue Crew” generated nearly $20,000 for the PTO program.

Parker Martinez of Marlow won the OKUSA State Championship in her division in February and was named Outstanding Wrestler. In April, she won a national title at Adidas Wrestling in Independence, MO. Martinez, 11, hopes to one day be Marlow’s first-ever high school girl’s wrestling state champion.

CH baseball team won the consolation bracket at the Elmore City-Pernell tournament after beating Springer 12-2. They were 6-14 for the season after a 10-0 win over the Bray-Doyle Donkeys.

Marlow baseball team recognized its athletes and their families, and they won 10-0 against Plainview in mid-April.

MHS track and field stars broke school records: senior Korie Kizarr, had a time of 11:45.78 at the Velma-Alma meet, and Kennedy Kizarr broke the pole vault record with her high jump of 11’1”.

The Outlaws baseball team remained undefeated as the season continued district play. Korie Kizarr was the recipient of The Marlow Review’s annual Headliner Award in May at MHS Athletic Awards. In addition to being in the Top Ten of the Class of 2022 academically, Kizarr is a four-time All-Stater and a three-sport athlete: Cross Country, Basketball, and Track, all four years of high school. She made headlines earlier this spring when she set a new school record of 11:45.78 in the 3200m run.

MHS senior Ty Scott was set for state tournament at Lakeview in Ardmore, after qualifying at Regionals at Lake Murray, with a combined score of 170 over two rounds. The Outlaw golf team barely missed qualifying as a team with a core of 718, edged out in two strokes by Perry for a spot at State.

Both MHS track teams charged into May, and brought home Regional Class and were going to 3A State competition. The Lady Outlaws won with 133 points, defeating Crossings Christian (124) and Heritage Hall (121) for the Championship. The Outlaw boys dominated their competition with 146 points, well ahead of Heritage Hall (95) and Lindsay (81). The Outlaws will take competitors to State in 15 out of 17 possible events.

MHS baseball team headed to the Class 4A State Tournament to face Lincoln Christian (30-12) in the first round of the bracket. At the Athletic Awards presentation, head coach John Morgan said he was confident in their ability to go all the way at the state tournament. “There are a lot of teams that, when they get off the bus you can tell they’re worried,” Morgan said. “We’re not like that. We’re Outlaws, and we’ve worked hard to get there and know we’re able to win.” The Outlaws were 30-8 this season and had a 14-0 record in district play, earning a bye for Bi-Districts and hosting the Regional Tournament.

Marlow senior Ty Scott had a 229 score after three rounds at the Class 3A State Tournament for golf. He was looking forward to playing at the Oklahoma Coaches Association All-State tournament in Tulsa in the summer.

Marlow senior Jace Gilbert was named Male Athlete of the Year by the Oklahoma Coaches Association. Gilbert was selected to the West All-State football team as a kicker and chosen for the West All-Star By Class team for basketball this spring. Gilbert will be recognized at the OCA Hall of Fame banquet on Saturday, July 23 at the Southern Hills Marriott in Tulsa. Gilbert will continue his football career this fall at Iowa State.

The Outlaws finished their baseball season with a loss to Blanchard in the Class 3A State semifinal game, ending the season with a 31-9 record.

Letter of Intent: Marlow senior Korie Kizarr signed with the University of Central Oklahoma in mid-May, to continue her athletic career on the Cross-Country team for the UCO Bronchos.