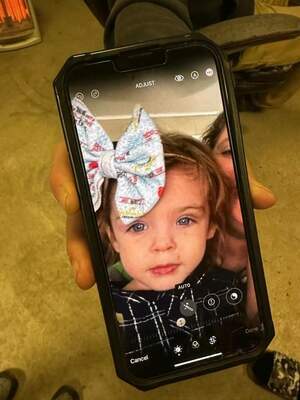 MISSING: Athena Brownfield, 3, of Cyril, Oklahoma, is missing. She is autistic and nonverbal. She weighs about 45 pounds. Photos supplied by Steve Booker of Cyril/Courtesy to The Marlow Review

The entire community of Cyril gathers near the home of missing child, Athena Brownfield, Tuesday, Jan. 10, 2023. Residents searched throughout the entire town. OSBI has now taken over the search. Photos by Steve Booker/Courtesy to The Marlow Review

Cyril, Oklahoma, located in Caddo County, northeast of Lawton, is now the center of OSBI efforts in the search for 3-year-old Athena Brownfield, who was reported missing Tuesday, Jan. 10, 2023. Photos by Steve Booker/Courtesy to The Marlow Review

Cyril, Oklahoma, has one officer on payroll. OSBI has taken over the case of missing Athena Brownfield, age 3, who was reported missing around 2 p.m. Tuesday, Jan. 10, 2023. Photos by Steve Booker/Courtesy to The Marlow Review

The home at 3rd and Nebraska, across from the Dollar General Store in Cyril, Oklahoma, is taped off with crime scene tape, after 3-year-old Athena Brownfield, was reported missing. Photos by Steve Booker/Courtesy to The Marlow Review
Previous Next

CYRIL, Okla. (January 10, 2023) – The Oklahoma State Bureau of Investigation (OSBI) is assisting Cyril police and other law enforcement in the search for a missing three-year-old from Cyril. Athena Brownfield was reported missing around 2 p.m. Tuesday, Jan. 10, 2023, from 225 W. Nebraska. Cyril police asked for assistance from the OSBI with the search. A command post has been established at Family Life Church in Cyril. OSBI requests that interested individuals do not self-deploy to the scene. If you want to volunteer to help with the search, please come to the command post and ask for the OSBI.

Cyril police, Caddo County Sheriff's Office and the Oklahoma Highway Patrol are assisting with the search.

If you have any information about Athena’s whereabouts, contact the OSBI tipline at (800) 522-8017 or email tips@osbi.ok.gov.

This is an active and ongoing investigation. More information will be released as it is available.

What we know: Cyril residents spent several hours searching their entire community, including in storm shelters and sheds. Athena may be nonverbal and autistic. She could have been wearing a big pink bow when she disappeared. She may be about 45 pounds.