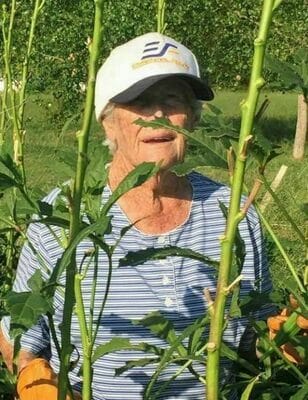 On Saturday afternoon, January 14, 2023, Jolene Davis passed from this world at her home surrounded by family. Mollie Jolene was born on her father’s birthday, February 23, 1936 in Soper, Oklahoma to Lester and Lorene (Warren) Wiginton.

Living in Soper as a young girl until 1944, the family relocated to the Marlow area where she first attended Bray schools. She later finished as a Marlow graduate in 1954.

Upon graduation, Jolene moved to Lawton to work at the telephone company. She met John Davis, a soldier at Fort Sill. This romance started with roller skates and a Lincoln. Three months later they were married in Marlow at the Nazarene Church on May 18, 1956, a marriage lasting 66 years. To this union 3 children were born: Jay Davis and wife Kim, Kay Hall, and Michael Davis, all of Marlow.

Jolene told her father she was going to be a farmer when she grew up and she did. She enjoyed horseback riding, working on the farm, and family dinners, where she was an excellent cook. She was famous for turkey and dressing, along with Nannie’s Pink Stuff. You often could find her rocking grandbabies. She loved her chickens and spent a lot of time outside with them and her cows. She was an excellent business and cattle woman. She could tell you about all of her cows on her place and their lineage. She had a green thumb, much like her dad, Lester. She loved iris flowers, hollyhocks, and her garden.

She was preceded in death by her parents, Lester and Lorene Wiginton; sister, Wanda Cary; and brother-in-law, Chuck Smith.

Services are planned for 2 p.m. on Wednesday, January 18, at Whitt Funeral Home with Joe Ligon officiating. Interment will be in the Marlow Cemetery under the direction of Whitt Funeral Home. Online condolences can be made at www.whittfh.com.